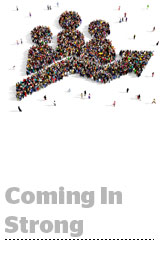 NBCUniversal execs anticipate a strong showing at the company’s upfront in a few weeks. “We’re going into the upfront with the strongest hand we’ve ever had,” said Comcast CMO Mike Cavanagh during the company’s Q1 earnings call on Thursday. NBC is leveraging its handful of tentpoles this season, including the Super Bowl, the World Cup on Telemundo and the Winter Olympics, to bring major agency holding companies to the table. Comcast’s revenue was up 5.8% YoY to $12.9 billion in Q1. The company topped expectations and NBCUniversal, in particular, performed well with revenues up 14.7% to $7.9 billion. Although growth was offset by a 2.9% decrease in ad revenue from declining ratings, NBCU recouped some losses through higher rates. Read the release.

Despite its first ever public dip in revenue and the abandonment of its TellApart acquisition on Wednesday’s earnings, Twitter experienced a much-needed bump in user growth [AdExchanger coverage]. Twitter COO Anthony Noto attributes some of that growth to President Trump’s obsessive use of the platform. “There also is some evidence that we’ve benefited from our new and resurrected users following more news and political accounts in Q1, particularly in the US,” he said. While investors thought the “Trump Bump” would take effect during the election, when the then-presidential candidate’s Twitter use became a matter of national attention, users seem more engaged now that they know he’ll be around for four years (at least). Of course, product improvements and cleaning up abuse on the platform didn’t hurt. More at Recode.

Frenemy Of My Frenemy

Martin Sorrell refused to call the GoogBook duopoly “enemies” (despite repeated prodding) in an interview with streaming video media company Cheddar. Google is the single biggest media investment across WPP’s online and offline ad spending, followed by the “Murdoch nexus” of Sky News and News Corp. and then Facebook. “You’re right that they have tremendous power, but they’re using that power, I think, in a sane way,” Sorrell said, citing Google’s quick accommodations and response to the fallout over YouTube brand safety holdouts. Watch the clip.

Amazon released Echo Look, a $200, camera-clad version of its home device that can tell you if your outfit looks good. Echo Look lets consumers upload pictures of their style for AI-enabled fashion advice. Amazon’s plans, of course, likely go far beyond being a virtual stylist. Sources told The Wall Street Journal that the ecommerce giant could turn the device into a virtual fitting room to make inroads in the apparel market or evolve it into a communications and security system for companies. The way Echo Look is designed “opens it up to many more use cases beyond just fashion and apparel sales,” said Werner Goertz, analyst at Gartner. But Amazon will inevitably be confronted with the security risks of putting a camera in people’s homes. More.