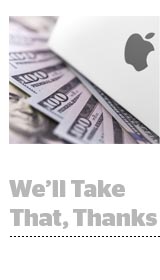 All For Me And None For … Thee?

Apple’s new privacy restrictions in iOS 14 could give its own small but growing ad business an edge over rivals, The Wall Street Journal reports. For one thing, advertisers targeting iPhone users will get more data about ad performance and user behavior if they buy Apple’s ad space than if they buy through third parties. And on the measurement side, advertisers that buy through Apple’s ad network will get granular results in near real time, as opposed to advertisers who buy ads through third-party platforms. In the latter case, advertisers will have to wait additional days to see insights  and they’ll still only get aggregate information, like the total number of users who took an action after an ad was displayed. An Apple spokesperson told the Journal that the company doesn’t advantage its own products and that the data restrictions for third-party platforms are necessary, because some advertisers can use that info to circumvent Apple’s privacy rules and track individual users. You could also argue that Apple search ads are technically first-party since Apple owns the App Store. According to Apple, its own ad products can’t be exploited by workarounds because advertisers on its platforms can only target large groups of people. Perhaps, but some see Apple’s moves as not-so-borderline anticompetitive. [Related in AdExchanger: “Apple Is Expanding Its Ad Business On The Cusp Of ATT Enforcement (Yep, You Read That Right)”]

American consumers are showing signs of optimism and brands are looking to capitalize on increased consumer demand as the world slowly starts to peek outside. According to a new report from Merkle, ad spend across most categories increased during Q1 2021, anchored by a particularly strong January, which saw 33% YoY increases in spend growth. Even travel showed improvements, with click traffic down less than 10% year on year and ad spend up (yes, up!) 5% over Q1 2020. Less surprising is the continued growth of Amazon’s Sponsored Brand ads, which remained strong in Q1 with clicks up 38% and spend up 26% compared with the first quarter of last year. Over on Facebook, impression growth was minimal compared to the sharp uptick in investment, which rose 19% and 21% respectively in the past two years, signalling an increase in competition and rising CPMs. Read on. [Related in AdExchanger: “Facebook CPMs Are Back At Pre-Pandemic Levels – And They're Still Growing”]

The Japanese government is planning to require large technology companies with digital ad platforms to implement measures for preventing ad fraud, according to Japanese news site Nippon.com. The government is also looking to revise its guidelines for protecting and collecting personal information so that the big tech platforms that provide targeted advertising will be required to let consumers easily opt out of seeing those ads. “It is extremely significant that our country is leading the world in adopting a plan for establishing rules in the digital advertising market,” said Chief Cabinet Secretary Katsunobu Kato, who also chairs the government’s council on digital market competition. “We will spread our way of thinking to other countries and contribute to the development of rules on an international level.”

Did you know that Time magazine accepts Bitcoin and 31 other types of cryptocurrency? Well, it does. Here’s why a nearly 100-year-old legacy publisher is embracing the crypto revolution. [Digiday]

Epsilon and Publicis Sapient are partnering with Adobe on identity. [release]

WPP is merging the specialist data units within GroupM and Wunderman Thompson to form a new global data consultancy called Choreograph that will be overseen by Kirk McDonald, GroupM’s North America CEO. [MediaPost]

Podcast company Acast has launched a new ad offering called Sponsored Stories that can be dynamically inserted into ad breaks across a show’s entire back catalog and any of Acast’s network for more than 25,000 shows. [blog post]

Planned Parenthood launched a campaign targeted at Black and Latinx young adults featuring videos running on Spotify, TikTok, Snapchat and YouTube with the tagline, “We see you.” [release]