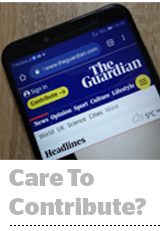 It’s been just over a year since The Guardian promoted Lee Glendinning from US director to its first executive editor for membership. It’s been important to have a decision-maker who can bridge the newsroom and the business side of things. “Roles like membership editors are sort of the ‘connective tissue’ between the readers, members, supporters and what’s happening in the newsroom and what our editorial priorities are as an organization,” Glendinning told Lenfest Institute, a local journalism nonprofit. Despite early skepticism, reporters are on board with the new program, she said. The membership revenue, which tipped The Guardian back into profitability this year, helps keep the site paywall free, which is also good for the writers. And you’ve gotta keep your writers happy. Authentic journalists do a better job than content marketers at converting potential contributors or subscribers. The Guardian is also getting better at developing stories most likely to drive contributions. Environmental reports, for instance, now come with a pitch to support the journalism, as do other stories related to issue advocacy. Working with the newsroom allows Glendinning to “tie editorial and journalistic output into something readers support.” More.

Amazon plans to sell audio ads in its Amazon Music service on Alexa-enabled devices. Amazon announced in April it would launch an ad-supported version of its streaming service for non-Prime members. But now that Spotify and Pandora are pitching brands on their ability to reach consumers on voice-activated devices, Amazon wants to exert more control over monetizing its own voice hardware. Amazon will guarantee reach for 1 million or more consumers and throws in fancy bells and whistles, such as the ability to ask Alexa to add items to cart, according to an agency pitch deck obtained by Ad Age. But, at least for now, there are no targeting opportunities, measurement is sparse and the audience is limited to Alexa users who don’t subscribe to Prime. “Amazon hasn’t quite figured out how to insert the ads in a way that makes sense and they haven’t thought out the usability for brands,” an agency exec said. More.

Unilever is making good progress with its data-driven marketing transformation, CEO Alan Jope told investors during the company’s earnings report on Thursday. Digital media now accounts for about 40% of Unilever’s overall media mix, he said, and the company’s ad fraud rate is in the low single digits, compared to the 20-30% gouge fraud is taking from other marketers. The company would like to spend even more online, but getting the necessary in-house talent is a challenge. “At the moment, the bottleneck on some of the great work we’re doing is warm bodies to run our digital campaigns rather than just absolute media spend,” Jope said. “We are putting marketing people in place to run these more complex digital campaigns.” Read the release.

Presidential candidate and House Rep. Tulsi Gabbard, D-Hawaii, is suing Google for allegedly undermining her campaign and looking for $50 million in damages. Google suspended Gabbard’s advertising account for six hours after the Democratic debates in June, which she claims impeded on her ability to fundraise and reach voters when Google searches for her name spiked. “Google’s arbitrary and capricious treatment of Gabbard’s campaign should raise concerns for policymakers everywhere about the company’s ability to use its dominance to impact political discourse, in a way that interferes with the upcoming 2020 presidential election,” the lawsuit said. The suit is the first of its kind by a presidential candidate against a major tech company, and it shows that while complaints of unfair treatment usually come from the other side of the political aisle, skepticism of big tech is an increasingly bipartisan issue. More.