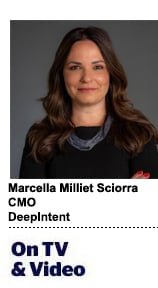 Today’s column is by Marcella Milliet Sciorra, CMO of DeepIntent.

Linear TV has long dominated the marketing mix for pharmaceutical brands and their agencies. In 2021, these groups spent an estimated $3.9 billion on national broadcast and cable ads, or about 56% of their overall $7 billion ad budgets.

Health care advertisers like linear TV because of its effectiveness at generating awareness of new treatments at scale, especially in categories that face a lot of competition.

But linear TV is on the decline. Each year, its reach drops by 2%-3%, as viewing behaviors fragment. Some estimates project that paid TV households in the United States will drop below 50% by as early as next year.

Meanwhile, COVID-19 accelerated streaming consumption. As linear declines, connected devices are now present in 80% of US households. Cord-cutters and so-called “cord-nevers” make up a significant portion of these households. Some estimates suggest 70% of streaming audiences can’t be reached by linear-only campaigns.

To increase incremental reach, media buyers across the ad industry are shifting their budgets to include more CTV placements. In fact, according to the IAB, nearly three-quarters (73%) of CTV buyers reported shifting budget from broadcast and cable to CTV in 2021.

But how long will it be until CTV completely dominates linear for overall audience share? And what should their pharma brands be doing to ensure the continued effectiveness of their marketing efforts amid this shift?

Linear TV has long ruled supreme, but all signs point to an inevitable rebalancing.

Unlike linear TV, where advertisers have to cast a wide net to reach select demographics, CTV offers precise programmatic targeting. That, in turn, makes CTV ads more relevant and cost-effective.

Instead of planning based on one or two variables, such as a show’s target age or gender, programmatic CTV affords media buyers four or more selections – such as a precise location, household income, and more.

Plus, privacy-safe machine learning algorithms can even find audience-specific correlations based on a single show or program, automatically optimizing campaigns based on real-world outcomes, such as improved audience quality and script performance. Data collected during this process can also further inform the planning and measurement of future campaigns to make them more effective out of the gate.

For these reasons, pharma marketers are increasingly turning to CTV as a larger part of their ad budgets. Linear will continue to play a part of a healthy media plan, but it’s no longer the same, reliable stalwart it once was.

The media landscape is shifting, and CTV appears prime to come out on top.