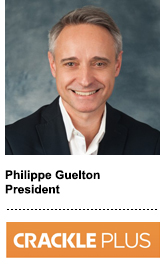 Is there room for yet another ad-supported video on demand (AVOD) app on the market?

Chicken Soup for the Soul Entertainment (CSSE), which owns the apps Crackle and Popcornflix, thinks so.

The company, famous for its uplifting book series for kids and teens, acquired independent TV and movie distributor Screen Media Ventures in 2017 along and with its subsidiary, Popcornflix. In 2019, it expanded its streaming ambitions by buying a majority stake in Crackle from Sony.

“CSSE was in the production and distribution business,” said Philippe Guelton, president of Crackle Plus. “We wanted to also have a direct-to-consumer relationship.”

The company now operates both apps, which together reach 30 million monthly active users and offer 10 thousand movies and TV shows under the Crackle Plus umbrella. Crackle Plus also represents ad sales exclusively for anime streaming service Funimation and nonexclusively for WarnerMedia’s Crunchyroll, giving advertisers access to a broad swath of anime content.

While Popcornflix offers an extensive back catalog, Crackle focuses on originals that align with CSSE’s inspirational storytelling DNA. The app sources content from Screen Media, which has relationships with independent producers.

Despite a competitive market, Crackle Plus benefited from the bump in streaming during the COVID-19 lockdowns this year. Viewing across its apps was up 30% to 40% in March and April.

AdExchanger: Is there an opportunity to integrate Crackle and Popcornflix?

PHILIPPE GUELTON: They both have high brand awareness and they’re both 100% AVOD, so we’re looking at putting the backends together.

But they have different audiences. Popcornflix has classics and family entertainment. It’s more like Tubi, with a deep library of content. Crackle is more millennial-centric and has originals.

How does Crackle Plus work with Screen Media?

We have a strong content acquisition arm to enrich Crackle. We can focus on original content in a sustainable way that doesn’t break the bank.

Our model at CSSE is that show production is prefunded through either brand integrations or tax credits, so we can limit the risk up front. Because Screen Media owns the rights to thousands of hours of content, we have endless access. By the time that content comes to Crackle, it’s been modified and the international rights have been sold. It’s an affordable way to create exclusive content that other AVOD platforms don’t have.

In the last year, the number of TV shows and movies on Crackle has doubled. We launch a new original every month. We’ll have 200 hours of original content on Crackle in the next year.

How are you differentiating your content in a crowded AVOD market?

Escapism, entertainment, studio movies and old TV shows are always going to be a part of the offering. But we focus on inspirational content, which I don’t think our competitors are doing.

Last fall we launched “Going From Broke,” which we produced with Ashton Kutcher, a shareholder in the company. The show focuses on student debt and helping young people make over their finances. It was the most successful Crackle original ever, and we’re launching season two next year.

We also launched documentaries such as “Road to Race Day,” which goes behind the scenes of NASCAR, and “Anything Is Possible,” which tells the story of an NBA champion who journeys home to the Republic of the Congo and becomes an inspirational figure. These kinds of shows are not only sought after by our users, but by advertisers looking for a safe environment.

What’s the Crackle Plus advertiser pitch?

It starts with the content. The shows we’re producing are unique, successful and bring in big audiences. Advertisers are always going to be interested in that. We’re also nimble, flexible and move fast. Brands can come to us for last-minute campaigns and we find a way to work with them.

One benefit of being independent is we can work with everybody. We’ve launched distribution deals with Philo, Xumo, Pluto TV and Xfinity Flex. Others struggle with being seen as the enemy media group.

A lot of our competitors are building walled gardens and reusing their own libraries. We can work with a lot of partners and we’re very focused on independent producers.

What’s your ad sales strategy for Crackle Plus?

A lot of other AVOD platforms started with programmatic. When we bought Crackle, it had strong direct sales expertise. I think it’s much harder to go from programmatic to direct than from direct to programmatic.

In a COVID-19 world, buying blind is not extremely popular with bands. They want to know where they are running, so our direct sales effort is very critical. We’ve seen direct efforts bounding back from COVID much faster than programmatic. But we [also] do programmatic guaranteed deals.

We sell audiences as well as brand and product integrations. We’re flexible in leveraging many vendors, including FreeWheel, SpotX and Telaria for programmatic sales, and Nielsen and iSpot TV for measurement.

What new or innovative ad units do you bring to the table?

Crackle already offered half the ad load of traditional TV, but we’re always looking to improve.

We announced a new product called FreeView, which allows the user to interact with an ad to get an ad-free experience. User win because they spend less time watching ads, the brand wins because that interaction is worth much more and it’s a higher CPM because the client has a 100% share of voice.

Do you sell in the upfront?

We’re having upfront conversations right now, but agencies and brands are less willing to make big, binding commitments this year. They prefer to make scatter investments right now, which is where we have a chance to get a bigger bite of the apple.