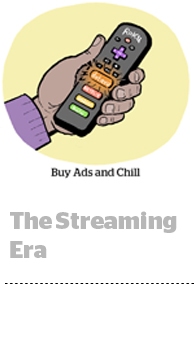 Roku isn’t immune to advertiser pullbacks during the pandemic.

But campaign delays and cancelations increased in early March as stay-at-home orders were implemented, especially in hard-hit verticals such as travel, quick-serve restaurants, cinema and auto, reducing margins by roughly 14%.

Roku, however, is better positioned to weather the COVID-19 storm than linear TV providers, said Scott Rosenberg, SVP and GM of Roku’s platform business, on its earnings call. Prime-time linear TV viewing declined 18% year over year from mid-March to late April, while streaming on Roku grew 80% to 13.2 billion hours.

“Right there, in a microcosm, you can see a significant shift in consumer habits,” Rosenberg said. “That’s going to force marketers to reassess their assumptions of how much they spend in linear.”

Advertiser cancelations have stabilized since April. Roku benefitted from brands moving money away from canceled live sporting events, and it signed on TurboTax, T-Mobile and Chase to sponsor its “Home Together” activation, which aggregates free content in one screen.

While the ad market is down overall, Roku expects its ad business to continue growing through 2020, albeit at a lower gross profit. It sees an advantage in its OneView platform, which applies Roku’s first-party data graph to dataxu’s DSP as marketers seek better targeting and measurement in a recession.

“In times like these, targeting and measurement matters,” Rosenberg said.

Roku has a diversified advertiser mix, adding more direct-response brands since it acquired dataxu in October 2019. “Data, targeting and machine learning are essential to advertisers as they move budgets to OTT,” Rosenberg said.

The company believes it stands to gain as this year’s upfront is disrupted, causing marketers to rethink how they approach the traditional TV investment period.

“We plan to continue to participate in the upfront process and be aggressive there,” Rosenberg said. “But the shift during COVID speaks to how important it is to move money and reach people [marketers] can’t reach in linear TV.”

Roku’s Q1 net revenue grew 55% YoY to $321 million, its fastest first-quarter growth rate in five years. Average revenue per user was up 28% YoY to $24.35. Q1 is the first quarter Roku included dataxu’s revenues in its earnings.

Viewers are watching both more SVOD and AVOD content as subscription services such as Disney Plus extend free trials and people seek free content in the downturn. The Roku Channel saw a 100% increase in streaming hours year over year.

“Value matters a lot to consumers,” Rosenberg said. “It always has, but especially now, free resonates.”

Overall, Roku believes the crisis is accelerating a massive shift toward streaming that was already underway, similar to how the 2008-2009 recession sparked the migration of print advertising budgets to digital.

“The reality is, the investment in TV has held up for years now as linear has suffered double-digit rating declines,” Rosenberg said. “We all know it’s not sustainable. It’s disruptions like this that encourage brands to rethink their media mix.”