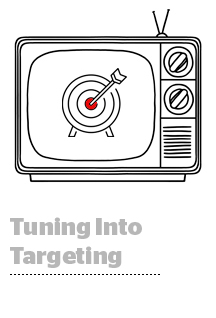 This isn’t a test: Data-driven TV planning is finally having its moment.

About 15-17% of advertisers in the US already regularly include addressable or advanced TV buys in their media plans, according to a joint Forrester/Association of National Advertisers survey of 126 ANA members released Wednesday.

An additional 20-30% of advertisers plan to start dipping their toe into advanced and addressable TV techniques this year.

But why now? People have been yammering about promise of targeted television for nearly 20 years.

“Quite frankly, we’ve got to give a lot of credit to the media companies,” said Forrester principal analyst Jim Nail, who authored the report.

Around three years ago, companies like NBCU, Turner, Viacom and Fox started talking about addressable, educating the market and building the foundations for what would essentially become data management platforms for television.

They didn’t do it because they wanted to change, they did it because they had to in order to “battle for dollars in the shift to digital,” Nail said, and those efforts are starting to pay off.

But some barriers remain. One is mental. Most advertisers still insist on a siloed approach to budgeting for TV and digital video, and it’s “insane,” Nail said.

“To plan digital video differently from television makes no sense – it’s just an artifact of the old traditional/digital divide that consumers moved past a long time ago,” he said. “It’s time to abolish that distinction and develop an omnichannel video-buying strategy.”

Advertisers are also still hamstrung by the lack of a single cross-platform, cross-device, “cross-everything” data set – but that really shouldn’t stand in the way, Nail said. With innovation comes a little uncertainty.

“Marketers and media buyers are just going to have to accept the fact that the data isn’t going to be 100% accurate,” he said. “The alternative is to sit back and wait another three, four, five, who knows how many years until the perfect data source arrives, and by then they’ll be left in the dust by competitors.”

Forrester anticipates the adoption curve of advanced and addressable TV techniques is about to look like a hockey stick. Tune back in a few years from now and the growth will have accelerated dramatically.

Although the survey didn’t have any exact projections to share, it did find that 94% of advertisers think TV will become more targetable within the next five years, while 84% believe it will become more automated. Eighty-two percent agree that TV ad buying will become more flexible and move away from the upfront model.

Data-driven television buying could even stem the flow of TV ad dollars to online video. Most advertisers, around 58%, still think TV is more effective for building brand awareness than online video, despite earmarking an increasing amount of spend for digital.

“But if TV can offer more targeting and it’s still perceived as the most effective place to communicate a message, particularly a brand message, that could slow down or even reverse some of the shift to digital,” Nail said.

The move toward more targeted TV ads also has the potential to complicate the upfront negotiations between media purveyors and media buyers. It’s all to the good, though, Nail said.

“The data that media companies bring to the conversation is now on par or maybe even more important that the content, the stars and the projected ratings,” he said. “And this is all happening at a time when buyers are starting to be less concerned about the Nielsen age-and-gender view of the world and more interested in audience composition.”