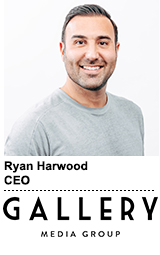 A year and a half ago, Gary Vaynerchuk bought PureWow, bringing together an agency and publisher under one parent company called VaynerX.

“We thought we were fast before the acquisition, but we are faster than ever before,” said Ryan Harwood, CEO of Gallery Media Group, which houses both PureWow and ONE37pm, a just-launched men’s lifestyle site.

“Being exposed to Gary [Vaynerchuk] put fuel to the fire,” he explained. “And we don’t get romantic and ideological about the way we do things and take more chances with content.”

The two companies share resources and trade knowledge at the same Hudson Yards office space in New York City. The media company and agency use the same massive video and podcasting studios. Information about beta tests and social media platforms are passed on to the editorial team – which in turn provides insight into content trends that may help the agency’s clients.

PureWow and ONE37pm create daily flash briefings on Alexa for its editorial brands. A fleet of Instagram handles – ranging from @cocktails and @catfeed to @cheeserank and @blinkbeauty – capture attention going to the uber-thin interest areas on social media.

ONE37pm, which marries entrepreneurship and style for young men, launched this summer. Harwood takes a platform-agnostic approach to brand building.

“Eyeballs don’t matter without the brand,” Harwood said. “I would rather have 1 million people recognize the brand than 1 million comScore uniques.”

Harwood chatted with AdExchanger about how Gallery Media Group is using its unique position as a publisher with a sister agency to inform its approach to branded content.

AdExchanger: Many publishers are building agency capabilities. Now that you know the other side, what do you think of that approach?

RYAN HARWOOD: I can tell you firsthand, now having seen both sides of the business, publishers are going to have a very hard time building what agencies have built.

The agency landscape is political in nature, you have [agencies of record], you have very long sales cycles. It’s a different mindset in how to build a business, in terms of hourly

. It’s a very tall task for publishers to create a massive agency business.

Does having better visibility into the agency side improve how you serve clients?

We’re serving clients better because our capabilities and resources expanded dramatically. Of course, we like to understand how agencies approach the market, but you could go to any media holding company and find that out.

For me it’s about having access to directors, producers and casting agents, people who understand how to build an Alexa skill. It’s those core competencies that weren’t there that would have taken investment or risk we weren’t willing to take before [to develop].

Why did Gary acquire PureWow?

He was an investor and had a vision to create a modern-day communications company that has attention at its center and skill sets in a lot of areas. So, if we wanted to own our own brand someday, we can run it through the machine and build a brand ourselves or help a client. Publishing was the missing piece. Agencies don’t own and operate their own audiences.

VaynerX wants to own brands?

This is a ways off, so we don’t talk about it frequently. But an orphan brand, say Mondelez was selling off Animal Crackers. Why not acquire it ourself and run it through the communications machine?

Back to the near term: Where are you moving “faster than ever before,” as you said?

Influencer marketing, podcasts – we are building a whole slate of podcasts. On Instagram, we’ve built a large portfolio of Instagram accounts because we felt there was underpriced attention there.

We have a handpicked network of influencers, The Coterie and The Roster. Plus, using proprietary tech we’ve built, we vet the entire universe of Instagram and YouTube influencers and select them that way. It’s two different tactics, and we like having both because it doesn’t make us biased and we can mix both.

Influencers are competing for attention and advertising dollars. Are they a threat to publishers?

Publishers are the OG influencers. I think that influencers rose because the platforms lend themselves nicely to making a human, one-to-one connection. But the lines are blurring across the board.

How is that reflected in how Gallery Media Group is approaching social media?

We have definitely shifted resources toward creating more content franchises on social as opposed to onsite. Brand affinity for PureWow is going to be built on the platforms versus on the site. If you look at PureWow’s Instagram now, we have video franchises we do on a consistent basis. We use our in-house talent and editors and create franchises, because we think that’s where the brand is going to be built.

Here’s a unique campaign: With our Instagram @cocktails, we did a #Top100Cocktails2018 program with Diageo, where 40 of the 100 cocktails had Diageo liquor in them. It was an editorial-driven branded content program. We are giving ourselves 40 at-bats to find the next Jack and Coke or Red Bull and vodka for them. Because if we can inject their brand names into culture, game over.

We created the Ketel Belle, for example, which has a health and wellness skew. We have this idea. The execution is great, the distribution is going to be @cocktails plus 20 health and wellness influencers recreating it in their voice. On our site, it will be a hub and pillar for us forever that we’ll do each year.

It’s execution of digital marketing multiple ways, and it siphons off the brand equity of @cocktails, PureWow and, next year, ONE37pm. And we did mini-ads. The production capabilities we have now are second to none, so we actually created ads for them.

Is the publisher the creative agency?

We’ve always been, even before the acquisition. [PureWow] never could have competed on the scale of banner ads, so we had to build a machine that understood how to do creative properly and then provide distribution. The fact that we can do 40 of those quickly – it’s a nimble advantage.