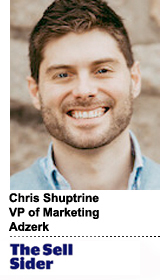 Today’s column is written by Chris Shuptrine, vice president of marketing at Adzerk.

In May Google announced major 2021 changes to its search ranking algorithm, including the addition of core web vitals, which are new metrics related to page load times and the jumpiness of content.

Google already penalizes sites for slow mobile load times and interstitial pop-up ads, but now it has introduced three specific scores to the algorithm that may ding programmatic ads.

One byproduct of programmatic ads, especially with complex header-bidding setups or an overloading of ad units, is slow-to-load, jumpy content. Publishers generally accept this suboptimal user experience because of the ad revenue that comes with it.

Such ads, however, appear to have noticeable, detrimental effects on the core web vital metrics. If ads lead to poor core web vital scores, then it’s possible these slow ad experiences could do more than frustrate users: They could also hurt SEO efforts.

With Google search being a heavy traffic driver for many sites, even a small dip in rankings could have a sizable impact on top-line revenue and page views.

How much do ads hurt core web vital scores?

This is easy to test with the Google Chrome browser and its built-in Lighthouse dev tool, which will refresh a page and return two of the three core web vital scores.

To see how ads influence these metrics, I ran the report with and without an ad blocker enabled.

I did this across four high-volume sites, all of which show multiple programmatic ads on their homepages, including a top-of-page leaderboard ad. I ran the Lighthouse report multiple times, with and without an ad blocker, and below are the average scores.

The first metric is cumulative layout shift: This assesses the visual stability of the page load. Do the content and images move around before the page finishes rendering? Google recommends a score of no more than 0.1, using an equation based on content size and distance moved.

The second metric I was able to test is largest contentful paint: This measures the overall load speed of the page’s main content, such as the largest image or text block. Does it load within the recommended 2.5 seconds as Google recommends?

These results suggest that programmatic ads do indeed hurt core web vitals scores. All four sites, for instance, saw a similar improvement – about 25-30% – in their largest contentful paint times when ads were removed.

It was even more stark with cumulative layout shift. All four were within the recommended score without ads; all failed with them.

This is a very small sample size, of course, and the test quite unscientific, but the results nonetheless suggest that ads do decrease core web vitals scores, which, in turn, could impact search rankings in 2021.

But there are other factors at play. Google has already stated that quality content supersedes these metrics, and we don’t know how much weight page rank will give them. (It could be close to zero.)

But if it’s proven that slow ads do hurt search result rankings, we could see a shift in how publishers approach their ad strategies, with page speed factoring more into the equation. This could lead to fewer ad slots or, say, calling four header-bidding partners instead of eight.

No matter what, publishers should monitor the situation in the coming year. Even small downgrades to one’s search rankings can have a sizable impact on traffic and revenue. The update isn’t going live until 2021 – and developers can do their own testing with Chrome well before then.