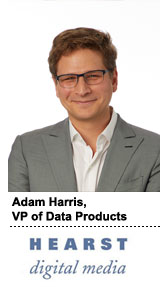 As the value of publisher data surges, Adam Harris, VP of data products at Hearst Magazines Digital Media, is tasked with maximizing its opportunities.

When Harris joined in May, he looked at how Hearst data can be used to create experiences that drive sales, which performance-focused advertisers demand from their digital media.

Hearst bought Rodale, and Meredith is buying Time Inc. The remaining trio, Hearst, Meredith and Condé Nast, each have a plan to defend and grow media budgets in the era of Facebook and Google, but Hearst’s linchpin is data.

Harris talked to AdExchanger about how Hearst uses its data for advertisers, why Apple’s Intelligent Tracking Prevention will be a boon for publishers like Hearst and how it’s prepared for GDPR.

AdExchanger: The frustration of the premium publisher has always been that they were top-of-funnel, making their inventory more expensive and also depriving them of credit for their influence.

ADAM HARRIS: The days of publishers saying, “That’s not fair, we’re top-of-funnel,” are over. The advertiser doesn’t stand for it.

As a premium publisher, you have to do both. You have to be beautiful and get people excited based on your brand. You have to help the consumer through their journey through research and consideration.

Then you have to know when the right time is – on your site or in social feeds – to help that person have the opportunity to purchase, which could mean driving to an affiliate partner or to the advertiser’s site.

What kind of data does Hearst have to work with?

One part is declared data from our audience. The other is consumption: site, section, how far you scrolled down, how deep you went down and did you scroll up.

Scrolling up is one of the greatest indicators of interest and intent in content. It’s the equivalent of reading the article aloud with your mouth wide open, so it’s really powerful as an indicator.

On social platforms, which are one-way streets, we are able to enhance everything in the social ecosystem based on the behavior users demonstrated on our sites.

From an editorial perspective, without really trying, we sold $20 million of product [through affiliate links] in December. That’s step one, just with our edit team. When we combine our brands with the data assets we have and knowledge about building compelling content, that’s where the story gets really interesting.

How does this data get put to use for advertisers?

If an advertiser wants to increase online sales, that message goes to the content team. They will pull data on what might or might not resonate for that product. The content could be something big and beautiful, and it could also have a big call-out or product hero shot in order to increase sales.

Then, based on people who read or liked that content, we put shopping experiences on other pages that are contextually relevant and audience relevant. Then we move onto Instagram and Facebook, and we could sequence the message there with other content. It’s about reinforcing that [advertising] message.

Does that mean driving sales on Hearst sites?

How is Hearst Magazines’ strategy different than Condé Nast's?

The Condé story is still very much around audience, and how audience maybe helps you at the top of the funnel and ultimately gets you all the way to the bottom.

Where we are focused as an organization is about how to leverage these [audiences] to create action. Why? Because that’s what the advertiser really cares about. The advertiser has been trained by the Googles and Facebooks of the world to look at how the media performed and how affected you are as a media provider, so we are moving down that path.

What type of clients are early adopters?

Retail fashion is really coming onboard, and it’s not only for the obvious use case, which is the online side. The offline side comes into play quite a lot in retail. Beauty is the other one.

From a publisher perspective, this is a huge opportunity, especially one with the scale of Hearst. Why? We see users, and we see them frequently.

Ultimately, the brand will have to match their raw assets with the publisher to gain access to their retargeting data beyond a 24-hour period.

Even the largest brands out there still have a challenge in getting people onto their physical site and definitely in having them come to that site repeatedly so the brand can constantly refresh their cookie or token in the ITP world and use that to send them messaging.

So Hearst can take over the role that third-party ad tech has traditionally had?

Yes. And there are very few publishers that are in the position to do that. Presumably you don’t consider Facebook and Google publishers, but if you do, well, yes, they can do it too. And Amazon has a terrific footprint as well.

How are the effects of Apple ITP manifesting now?

The brands aren’t there yet; they are still going through their Q4. And frankly most publishers aren’t thinking about it.

When you read the guidance for companies like Criteo, which are public, they expect ITP to cost them at least $30 million, and then the number kept going up. This is really good for publishers that leverage it properly with brands and become their partner in targeting.

Is GDPR good or bad for publishers? Do they end up worse off than Google, as Axel Springer has claimed?

Some publishers will benefit more than others. I agree: It’s beneficial to Google. It’s also beneficial to Facebook and Amazon because each of them has a relationship with the user where they can in no uncertain terms say, “Give me the rights to X, Y and Z or no longer use the thing I’m offering.”

Publishers need to have either content that is so compelling to the user they are willing to trade those rights or to be a brand the audience trusts. At Hearst, we have both.

How is Hearst preparing for GDPR?

Our legal team has probably been working on this long before I got here, at least a year-plus. We are going to be as ready for it as anyone in the space will be, with the caveat that it’s the ePrivacy regulation that you need to worry about much more, and the standard is not fully defined.

Plus, you have to make sure your ad tech partners are also in compliance.

That’s the biggest challenge. The ad tech space is still devising and developing their solutions. We are working with them in tandem to read the tea leaves and figure out where the standard will lie. And because we are Hearst, we will go higher than the standard.

We are working with our first touch point. But the challenge with ad tech is that there is a daisy chain of things that happen after that first touch point. There is the fourth vendor piggybacked on by the third vendor from the second vendor we didn’t know about. That’s where it becomes harder to meet the standard, especially around the right to be forgotten.

It’s going to be a mess.

It’s not going to be a mess. The standard will have to adapt to the reality. It’s important to the space that there is trust between the consumer and the brand. The ad tech space sometimes goes a bit gray.

At Hearst, our pages are so clean. I get an email about three times a week from one of our tacticians about latency being introduced by daisy-chained partners asking: A) Do I know who they are? B) What value do they provide? and C) Is that partner important to us?

If we can’t answer those questions, they get turned off.