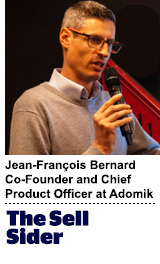 Google’s move to a first-price auction will change the dynamics of the publisher stack and redistribute revenue for publishers across all the channels they use.

Consider a stack with Google’s exchange at the “center,” with some supply-side platforms (SSPs) activated with Google Ad Manager through Exchange Bidding and other SSPs activated through header bidding.

Because of Google’s move from second- to first-price auctions, I would expect header bidding’s added value for publishers and long-term revenue opportunity for them would both decline, along with the revenue for SSPs in Exchange Bidding.

An indirect, negative impact on revenue from header bidding

To be clear, there is no immediate impact of Google’s move to first-price auctions on header bidding revenue. If a header bidding SSP bids higher than Google’s exchange, it will continue winning the auction.

But the move will create an indirect effect: As CPMs in Google’s exchange increase, the share of budget captured by Google’s exchange from overall campaign budgets will increase. Advertiser budgets won’t increase because of the move to first-price auctions, and if they spend more through Ad Manager, they will spend less elsewhere. If Google Ad Manager wins more impressions, it should reduce the share of budget left to header bidding SSPs and, consequently, decrease the flow of money going to header bidding.

Header bidding revenue will be impacted as a side effect of Google’s migration from second-price to first-price auctions. Google is in a favorable position to increase its “revenue weight” within the publisher stack; I also expect Google Ads and DV360 to increase their share of revenue within Ad Manager due to their better understanding of the overall auction logic on publisher ad stacks.

This shift of revenue from header bidding to Google’s exchange creates an opportunity for publishers to re-evaluate their header bidding stack and keep only the most pertinent partners, since their added value decreases in a world where Google Ad Manager also uses a first-price auction.

SSPs in Exchange Bidding will be at a disadvantage vs. bids coming through the Google’s exchange. Since Google Ad Manager will now submit first-price bids, CPMs in Google’s exchange will increase.

Bids coming from SSPs in Exchange Bidding are reduced due to the fee taken by Google for the Exchange Bidding service. As a result, these bids are not competing on an even playing ground with Google’s exchange. For example, an advertiser’s $7 CPM bid through header bidding would be reduced to $6.65 through exchange bidding, assuming a 5% fee.

The win rate of Exchange Bidding will likely decrease as a result of the added fees. Header bidding, with its better cookie matching rate and the absence of take rate from Google, seems better positioned than Exchange Bidding from a yield standpoint.

The CPM a publisher will get from the winning header bidding SSP will not change after Google moves to a first-price auction.

After the move to first price, publishers should re-assess the benefits and costs of SSPs that are bringing low revenue in the header, including operations, partner relationship management and website latency. Their added value in the stack will decrease, but their cost will stay the same.

Publishers that rely on mediation rather than header bidding will be similarly impacted.

Google’s move to a first-price auction will probably change the whole dynamics of the publisher’s tech stack. Publishers should reassess their setups and their relationships with partners plugged into their header and through Exchange Bidding. Some partners will continue providing real added value, with extra demand and better CPM for some specific audiences, but others won’t.

Publishers should focus their efforts on the remaining valuable partners and manage their stack, including PMPs, priorities and unified floors, to extract the most value out of this new environment.