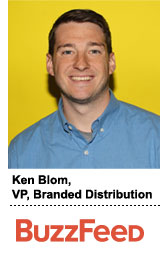 The decision came down to two factors: increased advertiser demand for programmatic and a better user experience, said Ken Blom, BuzzFeed’s VP of branded distribution, who leads the 30-person team that will handle the programmatic logistics.

“We don’t want to say no to an advertiser who is looking to transact programmatically,” Blom said. “We’re intrigued by brands’ ideas too, and to close off programmatic is not something we want to do.”

“Six years ago, programmatic slowed down the site experience,” Blom said. “But these platforms have made the user experience better.”

Revenue also will rise at a company whose fast growth has included bumpy course corrections, including missed revenue estimates in 2015 and layoffs in 2016. BuzzFeed may be planning an IPO for 2018, and an extra revenue stream to monetize its 76 million US visitors wouldn’t hurt.

But Blom said that wasn’t a primary consideration, evidenced by the light load of programmatic ads gradually rolled out on BuzzFeed.

Blom talked with AdExchanger about BuzzFeed’s programmatic plans, the new ways in which publishers will use paid media and why publishers need to become more sophisticated media buyers.

AdExchanger: What’s step two for what BuzzFeed will do programmatically?

KEN BLOM: Step two is a continuation of looking at user experience: making sure that we are serving the behavior of the site as well as we did when we didn’t have third-party ads. Then, it’s introducing more partners and talking about private marketplaces. All can be done with the pipes already placed.

But what I’m most excited about is how branded content and programmatic can work together and showing the incrementality of those two things. That’s something that will take time.

What happens when you put the two together?

Branded content is a great way of doing native advertising, but it’s also a great way of building audiences around something the brand believes people connect with. Once you have that connection, you can do more things with programmatic or audience extension to move those people further down the funnel. This allows us to service multiple parts of the clients’ business.

What if retargeting wasn’t about buying something but taking the next step to do things like content sequencing or new ways for an audience to opt in to something?

The beauty of data and audience development is that we can control the message we deliver down the audience, platform and even time of day we reach the person with a message. The standard is to use this [data] for the lowest common denominator, last-click attribution, which removes the human element.

With content, we get to think through the jobs that content does in one’s life. This type of thinking could add a more human element to content sequencing or retargeting.

How are you staffing up for programmatic?

Normally, paid social and ad operations are separate teams and functions. My team – the branded distribution team – is part pure ad operations: people who have lived in ad serving, where DFP and programmatic is a core competency.

The other half are people obsessed with paid social. It’s a team of 30 people focused on buying ads on Facebook, YouTube, Pinterest and BuzzFeed.com, where BuzzFeed places and optimizes teasers for its branded content.

They are merged, but we are pulling some people to focus on programmatic. The staffing up will come from a new opportunity to go a bit further down pure ad ops. Having hybrid roles has been the exciting thing, because now I have people that buy Facebook that know DFP, and that’s a skill set I think publishers haven’t built in the same place.

Why are hybrid roles better?

In most ad ops roles, you can claim victory after you hit the impression goal for the banner unit. But do you ever get to inform what’s inside the banner? No. That’s the part of programmatic we don’t like.

Those communication pipelines don’t exist. Here, you can walk over to the creative team and say, “We should do this next time we have the quiz.” There is a constant feedback loop.

You come from a search marketing background, which is often considered a good entree into programmatic or paid social.

When I was at Reprise Media, which is part of IPG, six years ago, there were a lot of conversations about programmatic and the Facebook Ad Marketplace, which at the time was only right rail.

Search agencies and media agencies were wondering, “Who runs [social]?” Display teams were saying, “There are images, so it’s us.” Search teams were saying, “Facebook is built off of interests, which are keywords, so we should run it.” You saw these two fight. No one had that foresight to blend the teams.

That was probably the largest reason I came to BuzzFeed. We decided to use any ad we could to get traffic, and that meant exploring this paid social space. In search, there is a psychology to the user giving you data and you matching an experience to that keyword. And display has reach, frequency and the optics of getting my brand out there. Social is the perfect mix of the two.

What was your mandate when you joined?

What do you mean by “the insights we drive with paid”?

You can post to your Facebook page [organically] and get the views back to the content, but you don’t get to control who you are speaking to. You get more control when you buy ads and can learn more information for the client or about a piece of branded content.

Paid is a great way to test how people react to a character or a moment before we post it publicly or put big media spend behind it. You can do small things on Facebook to give you a directional signal, and there are thousands of ways to cut the data.

For example, you can do a gender-demo cut: Did the male population view longer than the female population? When you combine paid with organic, you open up an even wider net of optimization tactics.

Some publishers have secret sauces around how they build Custom Audiences to distribute content. Can you share any of yours?

I wouldn’t divulge the playbook on it, but you can build Custom Audiences off people who watch videos, visit your site or download the app. The way we collect data and target is not static. We can start messaging people based on their behaviors from last week to this week versus another week. It’s no different than a publisher building its DMP and using first-party data.

There is no magic bullet to the data we use. We customize it every time. Sometimes a small audience works really, really well, but you can’t grow that. It reaches its limit.

We had a post for an advertiser about honey, and all these beekeepers were commenting because we were targeting beekeepers. You stumble upon these things, and they are really interesting to the brand. But are you going to spend millions of dollars on your beekeeper universe? Probably not.

What’s the future of how publishers will use paid media?

There is this idea that publishers are so screwed because Facebook has the data. But if you know how to use the data and you can use it for your benefit, you are not in that position. Teams like mine are going to be something that publishers build.

Four years ago, you would have probably never heard of a publisher doing this. But paid media is not backfill. Facebook and social is the front page. And the only way you can use Custom Audiences is to buy media.