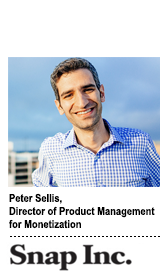 Snap is reorienting its ad strategy in rocky waters.

On Monday, Snap’s chief strategy officer, Imran Khan, said he was leaving the company he helped take public four years earlier. Khan’s departure came shortly after the company reported in its Q2 earnings that its daily active viewers had dipped by 3 million, even as revenue jumped 44% to $264 million.

On Monday, Imran Khan announced he was leaving Snap. What’s the organizational chart looking like at Snap now?

Imran’s my boss and I love him quite a bit. He’s staying on until they find a replacement and he’s announced that we’re looking for a chief business officer to replace him. That’s something we’re now in full swing for.

[Imran] has been with the business before we made a single dollar so there’s never a good time for someone like him to leave, but it’s definitely a decision we respect. He’s done so much for the business. I mean, he literally took it from zero dollars to where it is today.

Is Imran involved in finding his replacement?

I’m not sure if I can comment on that super well. If I were to speculate, he’d better be helping. But I haven’t been in the office since it was announced, so I can’t tell you too much about how that’s all going.

Do you foresee any other organizational shifts in the short term?

We renamed our sales organization as “business solutions.” It definitely reflects the shift to consulting instead of selling. When all your products are available in self-serve, you become almost an investment or adviser to that brand. It’s “Where should you put your money?” versus “Let me sell you something.”

And what’s in a name? A lot, in this case. It really aligns more with the success of the client’s business as opposed to some quota.

Could you walk me through an example of how Snap consults with a brand?

Domino’s Pizza in the US is a very data-driven advertiser. They treat advertising like a science and like an investment. What our team now would do is, rather than say, “Hey, you should buy a lens because they’re really cool,” they would say, “Hey, based on the audience you say works, let us design a campaign for you that involves a lens that calls people to order a pizza.” And then we can tell Domino’s the type of people who they should target it to.

Then, we’ll design an experiment on top of that, where we’ll withhold some of the audience and make sure we drove incremental pizzas. We didn’t just target people who were going to buy pizza anyway, we’re targeting people who wouldn’t otherwise order pizza. So [Domino’s] will use statistical modeling with us to look at that.

To be honest, the results aren’t amazing every time. Changing someone’s behavior is hard. The good thing is, an advertiser like Domino’s isn’t punishing you when results are bad. They’re only punishing you if they didn’t learn anything.

How are things going with Snapchat’s programmatic offering?

And we have really embraced advertisers who think about advertising as an investment. The best part of that is it’s just this hyper-rational group of people. And all you need to do is show consistency, stability, scalability and then results.

What do you mean by “rational” advertisers?

So yeah, we’re winning with the app-install guys. Those guys are great. But also with people mid-funnel, top-funnel, branding campaigns that are performance-oriented. They want cheap video views, they want efficient swipe-ups to their website, they want time spent with their lens and we’re able to deliver that.

How much of Snap’s ad business is programmatic?

We’ve moved all our formats into the programmatic auction, including the AR formats. It’s the first self-serve AR platform. And we didn’t expect to do it that quickly because we were dipping our toe in the water. And the results were good enough that we feel comfortable moving it all to programmatic.

What’s Snap’s next move from here?

At the end of the day, no one gets fired for giving another dollar to Facebook or Google, despite how much they say they don’t want to. We have to provide a reason to invest in Snapchat.