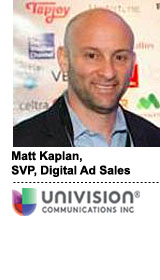 Spanish-language broadcaster Univision hopes to offset declines in local TV ad revenue by doubling down on its digital ad business.

It was an early adapter of Facebook Watch, Snapchat Discover and Snapchat Live Stories to reach its audience of millennial Hispanics, but Univision is emphasizing multiplatform campaigns to boost digital revenue. (Univision’s digital ad revenue was up 39% last quarter, now making up about 10% of total ad revenue.)

Earlier this year, the network created an in-house agency called the Digital Innovation Group to power the ideation, execution and distribution of branded content and media campaigns.

“We’re experimenting with different styles of platform-specific content,” said Matt Kaplan, SVP of digital ad sales for Univision. “A common refrain we hear from agencies and buyers is they want bigger and better partnerships.”

The Digital Innovation Group sits within Univision’s sales structure and collaborates closely with Univision’s research and insights team, which helps build a business case for brands using a variety of research tools.

Like NBCUniversal’s client partnerships team, it acts almost as a consultancy, advising clients on demographic trends and where their dollars will go the most miles in reaching their target audience – both on Univision and off.

“This group also does creative versioning, where they might compare Spanish-language to English-language creative around what guidelines for performance to expect from a given piece of creative,” Kaplan said. “Within our network sales team, we have this great resource to tap into to help us make recommendations for brands.”

For instance, Univision’s strategy and insights team has commissioned research on young Latina women and their attachment to beauty products. It found that millennial Latinas identified more closely to their Hispanic heritage than their non-Latina millennial peers, which a cosmetic advertiser might find useful.

“That helps inform a lot of decisions in a brand’s communications strategy,” Kaplan said. “We can then take a piece of research and validate that by measuring the performance of content and the social reaction.”

Univision’s sales team connects advertisers to commercial opportunities across its portfolio – both programmatic and high-touch sponsorship.

But to ensure a campaign’s success, Univision’s sales team has to fire on all cylinders, collaborating with Univision’s own editorial teams or its creator network of 200 influencers.

But Univision’s sales team knew the tentpole event was primed for sponsorship. So it connected Univision Deportes’ editorial team with a brand – in this case, Kia Motors – which wanted to align with a splashy soccer TV tentpole and to reach more Hispanic consumers in the US.

Univision Deportes’ digital team traveled the country to conduct video interviews with Major League Soccer players who were competing in the 2017 Gold Cup quarterfinals in late July or who had played in prior Gold Cup matches.

The network then used Univision Deportes’ digital site, as well as YouTube and Facebook to distribute its sponsored video interviews, and delivered double the engagement it originally had benchmarked for Kia.

“The Gold Cup was a one of the highest-performing tournaments this year in Spanish-language television from a TV ratings standpoint,” Kaplan said. “It’s [a good example of a digital activation] providing a much deeper way to amplify a brand’s content around a tentpole.”