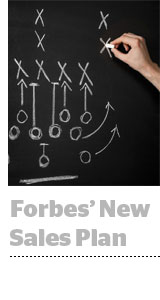 But Forbes, which integrated its sales team in 2009, switched back to separate lanes for separate mediums at the beginning of this year.

“All of this was motivated by what we were seeing when we would call on different brands,” said Forbes Chief Revenue Officer Mark Howard.

Selling cross-platform programs often requires buy-in from stakeholders at a brand and agency. Getting that buy-in led to repetitive meetings where multiple sellers would meet with a string of teams on the buy side.

“You want greater coverage in the market, not greater redundancies or duplication,” Howard said.

Plus, few of the buyers would purchase across all of Forbes’ offerings, so it didn’t make sense to have a single point of contact anymore. Howard found that the 20 biggest accounts each bought an average of 2.8 of Forbes’ offerings. A single brand, for example, might have done an event, a native buy and programmatic.

“It was very rare for someone to buy the royal flush,” he said.

The generalized approach Forbes used previously made it difficult to allocate resources evenly.

“Before, they all used the same common resources and had one big unit to support everyone,” Howard said. “Now we have dedicated marketing support to place the right resources into those business units.”

As part of the reorg, Forbes not only developed five sets of experts across areas like native and programmatic, it also split its teams into pre-sale and post-sale. People managing campaigns don’t also need to do the RFP work selling them, the publisher decided.

Since each unit has its own profit-and-loss statement, it can invest where needed. Smaller business units will benefit from that customization, but fast-growing ones will also reap the rewards of being able to increase staff according to their changing needs.

Customization helps because some revenue lines are growing faster than others. Both BrandVoice and programmatic have posted 40% yearly growth rates over the past several years, for example, making them fast-growing standouts.

Separating teams from each other does have the potential to put them into competition with each other, something Forbes is trying to avoid. The sellers receive incentives to sell to other platforms in addition to their own, encouraging them to work together.

Had the new compensation plan been in place last year, sellers would have performed even better, which is the test Howard uses to ensure the plan will support the new sales structure.