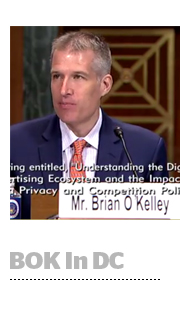 The programmatic advertising ecosystem is a mess – even its main architect agrees.

In testimony before the Senate Judiciary Committee on Tuesday, Brian O’Kelley, founder and former CEO of AT&T-owned AppNexus, shared a three-pronged proposal for how he’d start to fix the tangled web he helped weave.

First, give consumers control and transparency over their data. Second, create a consumer bill of rights and a regulatory entity that can keep up with the pace of innovation, something like what the financial sector has in FINRA, but for tech.

Current antitrust law, O’Kelley argues, uses price as the only measure of consumer welfare. Anything that lowers price is a good thing for consumers, anything that raises price is bad.

But that math falls apart when you’re dealing with free ad-supported services, like the ones Facebook and Google provide.

“This is the loophole that allowed Google and Facebook to complete hundreds of acquisitions over the past decade without any significant FTC review,” O’Kelley said. “Let’s apply some common sense to the regulatory process just by acknowledging that consumers pay for ad-supported content with their data and their attention.”

O’Kelley has firsthand experience underneath Google’s boot heel. After Google acquired DoubleClick, AppNexus started to compete directly with Google. Google went on to acquire a bunch more ad tech, including Admeld and Invite Media. Then AppNexus signed a big deal with WPP and, according to O’Kelley, Google’s response to the threat “was that of a classic monopolist.”

Google announced that YouTube would no longer allow third-party advertising technology, which O’Kelley characterized “a devastating move” for AppNexus and other independent ad tech companies. Google’s ad tech team told all of AppNexus’s clients that they had to use Google’s products if they wanted to continue buying YouTube. AppNexus’s growth slowed and the company was forced to lay off 100 employees in 2016.

“As a consumer, I see firsthand how my personal data disappears into the online void,” O’Kelley said. “As an entrepreneur I watched Google use its bundled services to unfairly attack my startup and cripple our growth.“

So, Brian, I think we know the answer, but do you believe that Google and Facebook need to be broken up? “Yes,” he told one of the senators who asked him that question directly.

“Google looks a lot like a super monopoly, like AT&T did in the early 1970; search, video sharing, ad serving, analytics – almost every single part of the internet is touched by Google,” he said. “Try living your life without touching Google tomorrow … I don’t know whether utility is the right term, but I do think we have to understand how to make it more fair for competitors in a Google-centric world.”