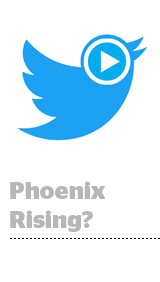 Stalling user growth and a rocky Q4 for ad revenue, which was down slightly year over year, present a particular sort of pickle: the need to buckle down on its key value prop.

“People come to Twitter to see what’s happening in the world,” said Jean-Philippe Maheu, VP of Americas at Twitter. “And a lot of the product changes [CEO] Jack [Dorsey] is driving have been to strengthen that single use case.”

Ad product changes including focus on video, especially live; ad formats like pre-roll and mid-roll; dynamic ad insertion for live events; and the ability to buy video on a CPM basis and get guaranteed views for targeted, sound-on pre-roll as a way to attract TV ad dollars.

In its letter to shareholders last quarter, Twitter claimed that video is its largest revenue-generating ad format.

The challenge, said Scott Symonds, managing director of media at AKQA, is that Twitter’s plateauing user growth means Twitter needs to “better align monetization to its unique position and quality assets in the media marketplace” rather than relying on new users as a source of potential ad revenue.

“They need to make the ‘power of now’ into even more of a differentiated assets and make sure advertisers know how to create value around ‘now’ moments,” Symonds said. “Twitter is aligned with this feeling [of timeliness] better than any other brand now, but how can they extract a premium for it?”

The first step is getting advertisers more comfortable on the platform, said Mike Park, Twitter’s head of content partnerships.

“We’re investing in opportunities for advertisers that are familiar, scalable and have proven ROI, like mid-roll,” Park said.

Park also helms Amplify, which has evolved over the last four years from a way for advertisers to sponsor video content through direct deals into a self-serve marketplace for pre-roll that makes the platform into more of a “daily monetization opportunity” and creates “new monetizable inventory.”

As Twitter inks streaming deals with the likes of the NFL, NBA, Bloomberg and BuzzFeed News, its offering will start to mimic that of a TV model, said Forrester senior analyst Jessica Liu, but with smaller scale and delivered via a social network.

The real opportunity is for Twitter to “explore TV ad revenue models instead of trying to replicate traditional social network revenue models,” she said.

Late last year, Twitter, which recently announced that it will be participating in the Digital Content NewFronts in May for the first time, launched the ability to insert mid-roll into live streams to power its content streaming deals.

“It looks like TV, but it’s also addressable and targetable,” Park said.

The size of the audiences Twitter is pulling in for livestreams – 3.5 million unique viewers on average for Thursday Night Football, roughly 4.2 million for the final debate of the 2016 US election and 8.6 million for the inauguration – arguably is competitive with some TV show audiences.

But Twitter doesn’t need to show that it can compete with TV audience as much as it needs to hold its own against Facebook, Google and, increasingly, Snapchat, all of which are relentlessly homed in on video.

Twitter’s monthly active user count stands at 319 million, up just 2 million last quarter. Facebook recently hit 1.23 billion DAUs and 1.86 billion MAUs, with an average revenue per user of almost $20. Although Twitter claims daily active usage is on the rise, it isn’t yet sharing a baseline to give the number any concrete context.

Rob Griffin, chief innovation officer at Almighty, put it more bluntly: “Their early struggles were because Wall Street expected them to be the next FB. Never gonna happen.”

The looming question is whether Twitter’s efforts will affect the bottom line and convince investors that its streamlined vision is resonating with advertisers.

If 2016 was about getting its message clear in the market, Liu said, 2017 could be the year the underlying strategy bears fruit from an advertiser point of view.