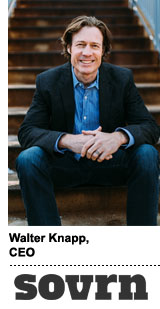 Sovrn CEO Walter Knapp sat down in a conference room on June 27 and told 27 staffers it would be their last day.

Before the layoffs, the company had grown from 50 people to more than 250 staffers in two years. It raised $18 million in August 2015, and then acquired three companies. Revenue grew by 60% last year with a 20% EBITDA margin, Knapp said.

So why the layoffs?

Knapp spoke with AdExchanger about why he trimmed his staff and what’s ahead for Sovrn and the ad tech space at large.

AdExchanger: What catalyzed the layoffs?

WALTER KNAPP: We cut out almost all of our video inventory. That’s the one big thing I didn’t say in my blog post.

At least in our market, the mid- and long-tail, there is not a ton of high-quality video content. We kept seeing these video ad networks pop up, and when we dug into it, they were calling it pre-roll when it was really in-banner, arbitraging between people, or doing worse, nefarious things. We got a bunch of garbage traffic. That’s not our business. We do pre-roll in front of long-form content.

So I thought, “I’m going to get out of the pool.” That was a meaningful amount of revenue. We were getting 1 billion to 2 billion requests to serve video a day. We shut all those networks off. We still do video, but it’s pre-roll, user-initiated, actual video. So that line item shrunk and that team needed to be re-prioritized and some of them were part of that restructuring.

This isn’t the first time you’ve walked away from revenue to deal with fraud.

I co-chaired the IAB’s committee on fraud with Scott Spencer two years before AppNexus did anything, and I was writing articles back in 2012 about it. Getting rid of things you know are fraudulent is easy. Getting rid of stuff that’s suspicious – that’s hard. Like if one vendor flags it, but others don’t.

When we got out of that pool, I thought we were going to ruin the company. But three months later, our yield, which is CPM plus fill rate, increased by 60%. It improves [because] the buying algorithms and the really good buyers will start biasing toward viewability and human interaction. Suspicious traffic isn’t worth it.

Did anything related to header bidding – wrappers, Google EBDA – contribute to Sovrn’s layoffs?

We were an alpha participant with EBDA and remain on the steering committee, but it is less than 5% of our revenue. That main value of EBDA is consolidated billing and vendor management.

Are all the ad tech layoffs this year and last year signs of an ad tech bubble that’s collapsing?

I think that header bidding will cause another wave of consolidation or companies going out of business.

Over the past 18 months, everyone and their brother could download the Prebid [header bidding wrapper] code, hot rod it and call themselves a header bidding company. You have a huge influx of companies coming to market. You could say the same about outstream video. It’s not a hard product to produce, and there were a lot of companies out there.

Remember Pets.com [the dot-com bubble disaster]? I refer to them as sock puppet companies. They hang a shingle. They can sow a little bit of confusion, and grab a bunch of publishers or buyers. But they are flash-in-the-pan businesses.

There are very few businesses that can build something long-term, durable and sustainable. I think OpenX, PubMatic and Index Exchange are sustainable, durable businesses. I think Rubicon has had missteps, and they may be in a tough spot, but it’s that kind of business too.

Chase created a whitelist to improve brand safety. If it reduces the sites it advertisers on from 400,000 to 5,000, how does that affect Sovrn, which has 60,000 sites in its network?

Every one of our buyers operates on a very strict whitelist. Not every publisher is on every buyer’s website. I’m a big fan of ads.txt and payment IDs.

We are the only supply source that has gone through two independent, third-party audits through TAG, for piracy and fraud. And that’s painful, like getting a proctology exam. And Google, Amazon and Facebook actually do care. They depend on there being a vibrant creator community.

Many bloggers are reducing their ad loads and instead doing sponsored posts, subscriptions and selling products. Is that shift toward revenue diversification affecting your advertising business?

We are constantly telling publishers to show fewer ads that are more impactful, that have highly viewability and where there will be a better share of voice.

The meat of our business is mid-size professional publishers, like the Vegetarian Times and Yoga Journal and Bicycling Magazine. The market is very underserved.

What is the biggest headwind at the moment?

Google won desktop and Facebook won mobile. And the third player is Amazon. I think if you are competing in the large publisher space – where we don’t go, so this could be self-serving – it’s hard. Facebook, Google and Amazon have more data, more infrastructure and more cash.