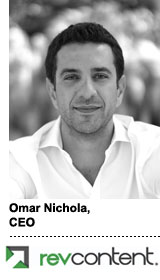 Revcontent named Omar Nicola as its new CEO Wednesday, replacing co-founder John Lemp in the top role. One of his first orders of business has been making further layoffs at a company whose employee count is around 80, down from a reported peak of 150 when it appeared on the Inc. list of fastest-growing companies back in 2017.

In a space dominated by Taboola and Outbrain, Revcontent has made a play to become the third-most used provider in recent years.

Mobile doesn’t have a right rail or as much room for links on the bottom of the page, making it more difficult to secure real estate on a publisher’s site.

Many of the publishers that Revcontent worked with have been hit by platform changes that punished viral publishers, fake news or bad ad placements that appeared after a user clicked. And the company has dropped others that didn’t meet its quality standards.

Low ad quality is another concern, as advertisers resort to clickbait to draw in users, which repels publishers worried about user experience.

Nicola said he took the role as CEO of Revcontent because he’s confident he can run a successful, profitable business – even amidst these “user experience” challenges.

“I’m not going to join a sinking ship,” Nicola said. “I won’t make the commitment to join the organization if there are  red flags. I see tons of opportunity here, and that was a big part of my decision to join.”

Nicola hopes to drive publisher growth and improve the quality of publishers and ads on the Revcontent network.

The company will make its publisher relationships more flexible to drive growth. Instead of forcing them to run multiple widgets, it will allow them to run smaller or fewer placements, in recognition that too many units may impact their readers’ experience.

“Publishers have to put in place their strategy of what they’re willing to do,” he said.

Instead of blocking lower quality ads across its entire network, Revcontent plans to let publishers control if they’re willing to accept them, Nicola said.

The majority of Revcontent’s advertiser base comes from direct relationships with clients, with a small percentage from third parties, or programmatic connections. Revcontent asks publishers to list 160 entries in their ads.txt file – an eye-popping amount that makes it difficult for publishers to control where their inventory ends up.

“While I understand the point of it ads.txt, we can all agree it’s really clunky and antiquated and people are looking for a better way to accomplish that goal,” said Revcontent President Richard Marques.

Nicola said that ad quality is an issue for all ad tech companies, not just Revcontent. “If it were up to me, we would have 100% fill of premium ads from Coca-Cola and Chevy,” he said.

Some publishers fed up with low ad quality on content recommendation engines have removed the widgets or at least grumbled about them.

Revcontent wouldn’t say if it’s lost publishers this year due to ad quality issues, and declined to give an updated publisher count or say if it was growing revenue. It also didn’t state how much of its business came from mobile.

Revcontent had already moved to clean up its network earlier this year, prior to Nicola’s appointment. It started removing articles that failed a fact-check test by the Poynter Institute, withholding payment, though it wouldn’t drop the publishers who posted the fake stories.

“When we find issues, we take them extremely seriously, and publishers are booted off the platform, and will never work with us again,” Nicola said. “I’ve seen firsthand what happened in the video space for the better part of 15 years, and the premium CPMs that have been taken advantage of for a long time. That short-sightedness of fraudulent traffic is not ever something I will allow Revcontent to risk for any revenue.”