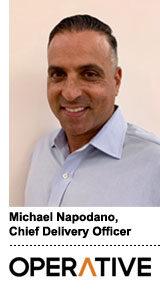 The former CTO of Disney ABC Television, Michael Napodano, who also spent a decade at NBCUniversal, joined Operative on Monday in the newly created role of Chief Delivery and Information Officer.

“Having been on the programming side of the house for so long, I wanted to challenge myself to be a part of a company that is going to drive real change in the industry,” said Napodano.

Operative, whose software is designed to help media companies manage their ad inventory, is anticipating a spike in new clients hoping to consolidate inventory across linear and digital. The company also expects to migrate existing clients of its linear ad sales system to a fully SaaS-based offering.

Napodano will assist in both areas, as Operative’s clients undergo the complex, lengthy integrations required to unify their inventory via Operative’s software.

What makes Napodano uniquely suited to the role is that during his career, he’s worked “wing to wing” across all the business, distribution, content and advertising tech required to make TV and video work.

Napodano’s experience on the TV programmer side included stitching together different tech systems and bringing old-school software up to date.

At NBCUniversal, he faced a frankenstack made of legacy tech from numerous cable acquisitions. Bringing all its inventory together and upgrading NBCUniversal technology enabled more “nimble” approaches with agencies, Napodano said, as well as innovations like the CFlight metric.

So he knows how to tackle inventory unification in an increasingly fragmented TV landscape. And he knows how Operative’s technology needs to fit in with all the other moving pieces in a media company’s stack, and the change management involved in software integrations and upgrades.

But media companies need to upgrade their ad tech now because their inventory is increasingly fragmented.

“If you have six buyers that want to buy six different ways, and as a media company you can’t deliver on who the buyer wants to buy, you’re not going to grow,” said Operative CEO Lorne Brown. “Many of these companies are living in fragmented environments, and that’s the biggest opportunity.”