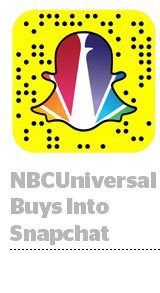 If publishers and platforms often hold contentious relationships with each other, NBCUniversal shows signs of wanting to change that frenemy dynamic.

Leading up to last week's Snapchat IPO, NBCUniversal invested $500 million in the video messaging and content app, CNBC reported Friday. That investment would give the media company an approximately a 2% stake, according to Pivotal Research analyst Brian Wieser, which the company must hold for a year. It brings NBCUniversal’s total digital investments up to $1.5 billion over the past 18 months.

By investing in a platform that could disrupt NBCUniversal’s business model, the media company is responding to changing audience dynamics it’s already observing.

“NBCUniversal is completely recognizing the fragmentation of the audience,” Wieser said. “It’s ever-harder to put together a large audience and a young audience on a regular basis.”

If eyeballs shift, traditional broadcasters will suffer the same fate of print publishers. They’ll have to manage a large but slowly declining source of revenue while investing in a fast-growing but relatively small digital business.

“TV networks and distribution platforms have watched the morass that traditional print publishers have found themselves in and are quite determined to have that not happen to them,” said Susan Bidel, senior analyst at Forrester Research. “They area taking proactive steps to have more control over their fate than print publishers were able to.”

Because of those changing dynamics, NBCUniversal definitely needs Snapchat. But the messaging app also needs NBCUniversal.

Long-term, it sees content, not just peer-to-peer interactions, as a way to sustain interest in the platform. And Snapchat has cut deals with publishers that let them benefit too – unlike Facebook’s figure-it-out approach to content creators.

NBCUniversal CEO Steve Burke positioned the deal as a partnership in a note to employees Friday: “It is rare to have the opportunity to invest at this stage in a company as visionary and dynamic as Snap, and it is a compliment that they chose NBCU as a partner.”

Snapchat will partner with NBC for the Winter Olympics in 2018, according to Burke. And in addition to its current partnerships that see content from shows like "Saturday Night Live," "The Voice" and "The Rundown" appear on Snapchat, more shows will be added.

Because the investment came in the lead-up to the IPO, it’s unlikely that the deal conferred any special privileges, as people have speculated about NBCUniversal’s investments in BuzzFeed and Vox.

“They are not necessarily going to get preferential treatment that they couldn’t have gotten anyway through regular commercial partnerships,” Wieser said.

But Los Angeles-based Snapchat likes how Hollywood approaches content. Snap Inc. hired former Viacom sales chief Jeff Lucas to spearhead sales efforts, and former Sony President Michael Lynton joined the board. The company now counts NBCUniversal as an investor and is calling itself a “camera company” with hardware – just as Sony manufactured TVs and sold the shows playing on them.

And there’s yet another reason NBCUniversal would have jumped at the chance to invest in Snapchat, according to Wieser: The platform works great for movie marketing.

“Universally, studio executives out there marketing films love Snapchat” because it provides them access to a young audience of frequent moviegoers, Wieser said. “That’s how they have a sense of the usefulness. But that’s a unique category. It doesn’t apply to packaged goods. And do you need to own a piece of it?”