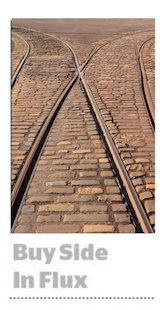 As its sell-side business takes off due to the success of its Prebid open source wrapper, AppNexus’ buy-side operation is treading water relative to rivals such as The Trade Desk.

Now the company is considering downplaying it further.

In recent months, AppNexus executives have pondered using parts of its buy-side business as a bargaining chip to strengthen its sell-side business, AdExchanger has learned.

One scenario could include referring existing or prospective customers to competing DSPs. In trade, those DSPs would bestow “preferred” status on the AppNexus exchange platform. In other forms, a pact to work more closely together would involve AppNexus forgoing the pursuit of new buy-side clients in exchange for being referred sell-side opportunities.

Although AppNexus’ buy-side includes a few truly huge buyers – like Xaxis (whose parent company, WPP, owns part of AppNexus), Accordant Media, AT&T, Wayfair and Anheuser-Busch InBev – it struggles to win clients in a space with so many independent options, from user-friendly The Trade Desk to feature-rich MediaMath. After a failed sales push last year to win client-direct DSP business, AppNexus seems to have realized that its tech isn’t resonating well with some DSP buyers.

In recent quarters, AppNexus has slowed its investments in buy-side technology and sales. When it laid off 13% of its staff last October, it dissolved its Advertiser Technology Group and Publisher Technology Group into one big organization. DSP product announcements slowed to a trickle. Salespeople from other ad platforms say they never run into AppNexus on RFPs and that AppNexus has turned away opportunities.

One basis for these negotiations between AppNexus and rival DSPs comes from challenges caused by header bidding.

SSPs now can differentiate by reducing infrastructure costs, and AppNexus is encouraging DSPs to consolidate their spend on AppNexus supply. For example, the company has proposed that for a list of 1,000 URLs, partner DSPs would promise to buy only through AppNexus.

Spending on just one SSP would reduce infrastructure costs, and AppNexus could add safety protocols to ensure higher inventory quality.

But some DSPs want more than just lower AppNexus fees; some want AppNexus’ clients or client referrals. AppNexus claims it never offered clients as a prize, but AdExchanger sources, speaking on condition of anonymity, begged to differ.

None of these deals have progressed beyond talks, but they offer insight into how both DSPs and SSPs are navigating connections to each other post-header bidding.

AppNexus, when asked about these talks, said it would not discuss any potential buy-side strategies until the company decides to pursue them.

A company spokesperson said claims about referring new business to other DSPs are “not really accurate” and talks about AppNexus transitioning existing DSP customers are “completely inaccurate.”

As for perceptions that AppNexus has stopped pursuing demand-side clients, AppNexus countered by saying it’s never gone after business that’s not within its “strike zone.”

Even if AppNexus no longer sees value in some of its buy-side business, trading clients by moving them from AppNexus’ DSP to another DSP would be tricky, if not impossible, and bound to anger clients. Asked how such a technology transition would work, many industry insiders were skeptical that such a scenario could happen – at least without causing massive headaches.

One reason it would be so annoying for AppNexus’ buy-side clients to switch DSPs is that many build complex technology on top of AppNexus’ API. They would lose those technology investments in the switch. AppNexus’ tech isn’t turnkey, a fact that may have contributed to its sales challenge but that does help with client lock-in.

AppNexus has always preferred to sell tech, not services. It sold its buying platform on the ability for customers to build their own algorithms and tech, while competing DSPs built user-friendly interfaces that cater to agencies and marketers. AppNexus also has not invested heavily in account management.

In spite of its client roster, many in the industry have never seen AppNexus as a formidable buy-side player, and expressed little surprise at seeing the company withdraw further.

One reason many cited for AppNexus’ struggles is that running both a buy-side and sell-side business leads to competitive conflicts. DSPs will always wonder if the company favors its own demand (a complaint consistently levied against Google that led to header bidding). Plus, working with ad networks, an area AppNexus focused on, leads to conflict because buyers and sellers see their businesses encroached on or conflicting with these middlemen.

Many companies that tried to run ad tech businesses on both sides later have sold one side off: Rubicon shut down buy-side platform Chango, with then-CEO Frank Addante admitting the acquisition was a failure. Tremor Video just sold off its buy-side business to focus on the supply side. Amobee sold its sell-side business to focus only on the buy side. The Trade Desk, which has seen its stock skyrocket post-IPO, consistently cites its single-side, agency-focused approach as a key to its success.

On the sell side, AppNexus doesn’t face as many independent competitors.

“If AppNexus wants to be a premier DSP, they have to compete with 20 credible, independent competitors,” said Chris Kane, founder of programmatic consultancy Jounce Media. “On the sell side, there is one competitor that matters, and that’s Google.”

Aside from its widely adopted Prebid header bidding wrapper, which supports more than 85 different partners, AppNexus’ sell-side product initiatives have included buying Yieldex and a publisher ad server from WPP. The company’s latest strategic investor wasn’t a buyer, but a seller. News Corp. shifted its allegiance from Rubicon Project to AppNexus last year.

In part because of anti-Google sentiments, AppNexus’ overseas business is particularly strong, sources say, giving it plenty of tailwind where its buy-side business faces only headwinds.

If Google’s sell-side business benefits from the entrenched nature of its DoubleClick for Publishers (DFP) ad server, perhaps AppNexus sees a similar opportunity with its header bidding wrapper.

“Wrappers make DFP less important by becoming the decisioning layer between programmatic buyers and the ad server,” Kane said. “They do seem like a viable way to compete with DFP.”

The publisher opportunity at the moment may make the costs of running a buy-side business less attractive – and thus open to negotiation. And don’t forget: This is a company that is still mulling plans for an IPO, with a competitor, The Trade Desk, that has made a strong case for a single-side ad tech business.