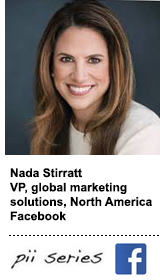 As Facebook’s VP of global marketing solutions in North America, Nada Stirratt is responsible for overseeing all of Facebook’s managed service business with small businesses to the largest global brands in the region.

These days, that job requires a healthy dose of explanation and apology.

Facebook has been raked over the coals throughout 2018 and 2019, gaining intense government scrutiny that culminated in July with a $5 billion fine from the FTC, the largest in the agency’s history.

“I do take a lot of responsibility and I take it incredibly personally,” Stirratt told AdExchanger.

Facebook also has to deal with brand safety concerns from advertisers, who are wary of the platform being a walled garden with an inordinate amount of control over the industry.

Stirratt, however, is warm and earnest: “I believe in [the mission] at every ounce of my core,” she said.

And her media qualifications, prior to joining Facebook in June 2017, are diverse, having worked throughout her career in advertising and data, holding top roles at AOL, MTV, Myspace, Verve and Acxiom.

AdExchanger: A lot has happened at Facebook since you joined before the Cambridge Analytica situation. How has your job changed?

NADA STIRRATT: The company has made dramatic changes to be so clear when it comes to protecting consumer privacy. Rigor, transparency, safeguarding and protecting people from harm is paramount. As Mark [Zuckerberg, CEO] has said repeatedly, there is no amount of money we won’t spend until we get this right.

Three years ago, maybe that degree of rigor, attention and severity was not as overt.

How often do you field concern from clients about headlines in the press? What’s your process for dealing with that?

On a daily basis. If a client doesn’t bring it up with me, I bring it up. As a marketer, it’s so important that your brand is in a safe environment that you trust.

Brand safety is a question everybody asks about, not just on Facebook. Our job is to get better and better so there are absolutely no bad actors on our platform.

Is that job ever done? No. We represent the globe. As the globe has bad actors, so will a platform as large as ours.

How do you respond to concern from friends and family about Facebook’s role in society and democracy?

When my family asks me about Facebook, I tell the story of when I raised $6,000 in a day and a half for Blue Star Families, a group that supports military families. It’s a super small organization. Without Facebook giving it a voice, no one would do anything about that.

There’s a lot of speculation about the future of Facebook. What do you think it holds?

There is a lot of attention on what we’re doing as part of the FTC settlement. That should be a story for a while. That’s going to be the new normal for the entire industry.

We’ve been very public that we believe there’s need for regulation. Nobody contemplated the responsibilities we would have 10 years ago. We’ve raised our hand and said we need help.

Let’s talk about the actual business. What does Facebook’s managed service do for clients?

It’s things like working on stories with our creative shop, or solutions engineering a couponing technology, or using workplace to bring a Facebook-like experience internally.

Do you skew toward larger brands?

It doesn’t matter how much they spend. It’s about what they want to do.

Look at automotive dealers. You would think we only work with GM, but there are massive tier-two aggregators that want to do branding as well as prove you brought someone into their dealership. Then there’s a network of dealers in your mom and pop category that also want to send people into their showrooms.

Before Facebook, you were the chief revenue officer at Acxiom, and CEO at Verve. What interested you about the data world?

I worked with Acxiom for more than a decade before I took that job. There were different permutations of the partnership that I thought were really strong and fascinating.

I loved the precision. While I consider myself quite right-brained, this was a way for me to understand the data business. It was an opportunity for me to lead people who are very different from me — engineers, product specialists, hardcore analysts.

What do you make of Acxiom’s sale to IPG and spinning off as LiveRamp?

It’s exciting for the agency to have deep relationships and consumer knowledge. It’s very complementary.

Is there a future for third-party location data vendors in today’s regulatory environment?

In many cases, it’s no longer needed. There are a lot of ways marketers can know what their consumers are doing. From surveys, QSR advertisers can tell that somebody has gone into a restaurant or responded to a coupon.

I think the myth that you could be walking in front of a Starbucks and getting a coupon is gone. The need for a third-party service is probably going to decline. But I do think there’s still high value in that kind of information.

I’ve got the roster of hobbies like an over-scheduled camp girl.

I draw, paint and play piano. I do all kinds of outdoor sports: I hike, I fish, I shoot. I used to be an avid rider until I had a bad accident. Now I ride my Peloton.

Two and a half months ago I brought home a springer spaniel puppy named Beba. She’s taken over our lives.