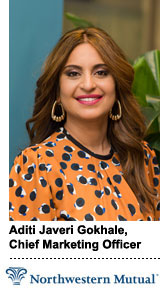 If you picture the traditional audience for consumer financial services, you likely see a silver-haired man or woman looking to plan for retirement and shore up their financial future.

But that mental image overlooks a younger, digital-savvy generation of consumers who aren’t thinking about retirement, and aren’t accustomed to working closely with financial advisers.

So Northwestern Mutual’s first CMO, Aditi Javeri Gokhale, knew it was time to change both the company’s data strategy and its messaging to transform how it speaks to the next generation of customers.

The financial services company now pays less attention to age and income, and more attention to prospective customers’ feelings about their money, financial goals and their stage in life.

And it applies that information to every step of the marketing journey – from its video spots, to the lead generation forms it passes to the advisers to the experience with the financial adviser.

“In the category we are in, there is a rational aspect to it, but a highly emotional aspect too,” Gokhale said. “We use a combination of EQ and IQ that I feel has been lacking in the marketplace.”

For example, Northwestern Mutual used to match prospects to financial advisers based on their assets, age and geography. Now, a matching algorithm looks at the life stage, financial goals and gender – leading to more than a 95% match rate between the prospects and the advisers. And more than half of those prospects converted to sales.

“Like dating sites, there is a massive amount of trust and chemistry [in financial planning],” Gokhale said – something its algorithm now takes into account.

The same focus on human data inspired Northwestern Mutual’s new branding campaign “Spend Life Living.” In one video ad, a couple builds a pool to spend time with their family.

Creatively, it’s a departure from traditional financial planning ads, which focus on saving for the future. That unusual narrative came about from a consumer insight that revealed that people often feel torn between enjoying their money now and saving for the future, Gokhale said.

Northwestern Mutual tested the ads using facial coding, which studies facial impressions of focus group participants, to understand which ads truly made an emotional connection to viewers. This  ad created an 18% increase in how many women said that the brand was  for someone like them.

Northwestern Mutual’s creative was also designed to convince more women and younger investors to align with the brand.

Following the ad campaign, lead generation popped 477%. Focusing on spending for present enjoyment brought in younger customers who weren’t as fixated on retirement goals. Its customer base in the 25- to 39-year-old age bracket grew 45%.

“Consumer expectations have evolved. They expect the same experience with financial planning as they do with Amazon,” Gokhale said.

For that reason, a number of direct-to-consumer companies in financial services have sprouted up, from automated investing platform Betterment to insurance company Lemonade.

Despite the emergence of self-service financial portals, Gokhale is betting that people still need financial advisers to plan for big life events, like paying college tuition or helping aging parents.

Both Northwestern Mutual’s products and its marketing plan to marry that Amazon-like digital experience consumers want with a human focus on financial needs that automation can’t intuit.