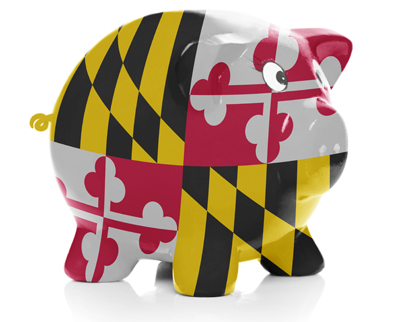 On February 12, Maryland became the first state in the country to enact a tax on digital advertising services.

The purpose is to ding Big Tech while generating revenue for the state. Maryland estimates that the tax will generate around $250 million in its first year, the majority of which will go toward plugging pandemic-related budgeting gaps, particularly in its school system.

In practice, the law imposes a sliding scale tax on the money that a company makes from the sale of digital ads that are displayed to the citizens of Maryland.

Google and Facebook generate way more than $15 billion a year – they generate more than that amount in a single quarter – which means they would go into the highest bracket.

There was a lot of sturm und drang to get this law passed. Although the bill went through the Democrat-controlled Maryland General Assembly with a majority vote in favor, the assembly first had to override Republican Gov. Larry Hogan’s veto of the legislation.

Pundits predict that Maryland’s first-in-the-nation digital ad tax could mark the start of a wave of similar laws across the country. But it could also potentially spark a debate over the legality of this kind of taxation.

We asked the experts: What are the wider implications on the larger advertising ecosystem of Maryland's just-passed digital advertising tax?

It’s possible that this development will give further impetus to Montana, Connecticut, New York, Nebraska, Oregon and Indiana that also have similar taxes pending – and that would be highly unfortunate as the law clearly violates the Permanent Internet Tax Fairness Act that bars discriminatory taxes on digital media. It also almost certainly violates the Dormant Commerce Clause and therefore is unconstitutional.

This law will clearly fall heavily on businesses already struggling to survive due to the pandemic.  This law also will force businesses and the state to expend substantial sums to fight this issue out in the courts. Those costs mean it will provide no benefit to the Maryland education system for which it was supposed to supply needed funding.

Maryland’s digital tax proponents argue that the tax only targets Big Tech​, not the people of Maryland. But in reality, it forces the tech platforms to pass along any costs they incur from the tax to the advertisers that use their technology to target audiences in Maryland, a.k.a., Maryland’s citizens.

The only natural outcome of the tax is rising costs for businesses to advertise in Maryland, less spending on media inventory in Maryland and higher costs for customers to consume digital content in Maryland. The implication for the larger advertising ecosystem is that legislators in other states and abroad may see the ecosystem as an easy, victimless source of new revenue to finance social needs.

The desire to acquire state revenue to fund education and other necessary services is understandable. Still, a transparent, nondiscriminatory alternative approach is a better way to go about it for consumers.

It’s unfathomable that during a historic stretch of American economic hardship, the state of Maryland has chosen to add a crushing blow to its small businesses and their chance at survival.

Raising taxes and costs on Marylanders in the middle of a global pandemic was misguided, shortsighted, foolish and harmful to countless merchants and their employees. The burden of this tax will be passed down to consumers, as admitted by State Senator Bill Ferguson.

Hopefully, the tax will be stopped in its tracks before too many closures and lost jobs sweep across the state. The Maryland General Assembly swung at Big Tech, and instead hit their constituents.

There’s relatively broad agreement by national governments that tax policies need to adapt to a world that, notwithstanding the recent rise of trade barriers, is increasingly globalized, increasingly virtual, increasingly dependent on intellectual property and tolerates or supports very large businesses.

The combination of these factors make it possible for the world’s technology giants to incur costs in high tax jurisdictions and record revenues in low tax ones, meaningfully reducing their cash tax obligations in the process.

Policies related to how stock-based compensation can be used to further reduce tax obligations are another factor exacerbating the issue. Because the public can only see total tax costs or payments, it amplifies perceptions around the problem. I think that there is momentum to establish a common global framework to address taxation of the world’s largest digital media owners. But it may take a few years to play out.