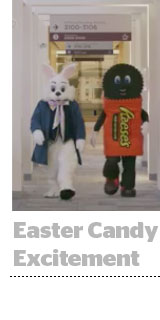 Chocolate eggs are big business for Hershey’s, the company behind Reese’s peanut butter cups and Cadbury eggs. The candymaker generates $550 million in sales of Easter candies, making it the second-biggest holiday after Halloween.

“We needed to continue to own that conversation in the social media space,” said Tashima Garner, the Hershey’s senior associate brand manager for Easter.

While Hershey’s once relied on the brands to do Easter-themed promotions, the seasonal team began receiving its own paid media budget a few years ago. To maintain or grow its leadership position in the market, where it commands a 31% market share, Hershey’s Easter team created a Facebook video to promote Reese’s Easter offerings.

The seasonal team developed a few different creative and directed its resources toward the one that represented the “swag, charisma and confidence” of the Reese’s brand, Garner said. A costumed Easter Bunny and the Reese’s mascot, Cuppy, walk down a hall in slow motion, promising viewers that together they’ll give viewers “The Best Easter Ever.”

With Easter just days away, the video has amassed 1.4 million views and more than 500 shares and 250 comments, according to Garner.

Hershey’s goal is to maximize reach for the video, which it believes has the biggest impact on sell-through, or the percent of candies sold before post-holiday discounts. In other words, maximizing reach is the most effective tool to increase sales.

“Over the years, we’ve learned that likes and shares don’t necessarily equate to success of having a consumer change their behavior,” Garner said.

The candymaker came up with two targets to watch the video, which created a potential market of 62 million addressable consumers. The first target was millennial moms.

“Through research, we found that millennial moms is who we need to target,” Garner said. “She’s the one already buying candy, she’s the one looking for the next best innovation, [like a new candy flavor] coming out, and she’s the one decorating and putting together baskets for the kids.

The second target is the core Reese’s consumer, who also falls into the millennial age bracket.

With Easter falling in late April this year, the team has had three additional post-Valentine’s Day weeks to sell the spring candies. Garner can look at Nielsen data showing how sales are tracking, but with one significant blind spot.

“We can’t get a strong read until the team goes back and does the necessary flagging for seasonal items and new innovations,” Garner noted.

For the CPG brand, the ultimate metric of success will be sales.

“If we gain an additional three points of sell-through on Reese’s Eggs, the campaign is a success,” Garner said. “It will show that we have driven that excitement with consumers, who went out to a local retailer to purchase more of these items.”