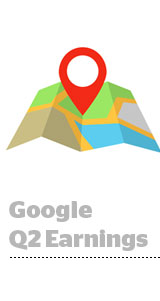 Uncertainty around government regulation or challenges around monitoring user-generated content didn’t slow down Google as its ad revenue hit $32.6 billion in Q2, up 16% YoY. (Its parent company Alphabet's revenue rose 19% YoY to $38.9 billion in Q2.)

YouTube was the No. 2 driver of revenue growth in both Q2 and Q1, CFO Ruth Porat told investors on Alphabet’s earnings call Thursday. Removing content that violated YouTube policies had “virtually no impact” on YouTube revenues, she said.

She also said that GDPR, which went into effect in late Q2 last year, has not yet impacted revenue. “The overall impact on consumers and business is still playing out,” she said, adding that Google was focused on compliance with the law.

Machine learning helped drive advertising growth in its sites' revenues. Google’s advertisers can easily process complex data sets and get back real-time insights, which make its platform easier to use, Porat said.

Impressions across Google network members increased 11% YoY but were flat quarter over quarter, and cost-per-impressions declined 1% YoY but increased 5% sequentially.

One investor asked CEO Sundar Pichai how impending regulation from the Department of Justice would affect its business.

“We will engage constructively,” Pichai said. “It’s not new to us. We have participated in these processes before.”

Google also plans to use “federated learning,” a process that can train AI models without raw data leaving your device, to protect user privacy more.

Alphabet will also add more privacy controls in the next Android release, such as 50 new features around privacy and security, including for location tracking.

“Building for everyone means privacy is equally available for everyone,” Pichai said, the closest he got to addressing Apple’s privacy-focused messaging around its upmarket iPhone.

While WarnerMedia and NBCUniversal have been optimistic about low customer acquisition costs for their not-yet-launched streaming services, YouTube TV is already out, and it’s driving up costs for Google.

Because of the costs of content and to acquire customers, YouTube Premium and YouTube TV have a higher cost for the revenue they generate, Porat said.

Fresh off the $2.6 billion acquisition of Looker in June, Google revealed that its Cloud business has an $8 billion run rate. The previous time Google shared numbers in 2017, it had just a $1 billion run rate.

Google Cloud broke ground on three new data centers. It will triple its sales force over the next few years. And Google Cloud was the No. 3 driver of revenue growth.

One final note: Expect to see more of Google as an advertiser next year. The company will make a splash as a sponsor of the 2020 Tokyo Olympics.