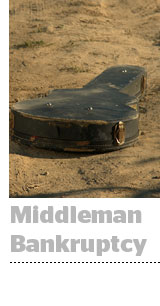 Marketers’ push for viewability, ads.txt and GDPR eventually led to the Chapter 7 bankruptcy of RockYou, an ad network and media holding company, on Feb. 13.

Most notably, RockYou owed $2.1 million to Facebook, where it likely paid to promote articles.

But it also had many six-figure obligations to other ad networks, as well as companies like Zynga and Oath, where it may have bought inventory for its ad network. Hosting content and running ads costs money: RockYou also owes six figures to cloud server providers Amazon Web Services and Rackspace.

RockYou’s three different businesses included an ad network, online games on Facebook and media properties. But the ad network business’s precipitous decline forced it into bankruptcy, according to a source familiar with the company.

First, the push toward viewable ads at the end of 2017 heavily affected RockYou, with its video inventory receiving low marks on viewability. As an ad network, it couldn’t control the publisher’s page. Its Facebook desktop games included many nonviewable ad placements, like below-the-fold, in-banner video, that marketers stopped buying.

Later in 2017, ads.txt came around and gained close to 90% adoption by July 2018. Publishers pared back their partners, which made it hard for anyone in the “reseller” category, like RockYou, to survive. Plus, Facebook didn’t participate in ads.txt, delivering a further blow to RockYou’s social media games.

The regulatory hurdle of GDPR was yet another revenue hit the already struggling company couldn’t bear.

In an October 2018 interview with AdExchanger, then-CEO Lisa Marino said RockYou intentionally bought games and digital media properties in decline and managed them through their slow traffic loss. Marino said LittleThings would do $1 million in revenue that month.

But Marino was let go on Jan. 3, and received $12,500 (about two weeks pay) in severance, according to the bankruptcy filing.

Among the creditors listed in the bankruptcy filing include many sources publishers use to acquire traffic. Besides the $2.1 million RockYou owes to Facebook, it owes another $286,000 to Taboola’s ConvertMedia, and $132,000 to  Outbrain. RockYou also lists $3 million owed to CafeMedia, whose sites it acquired last year.

Two weeks before RockYou filed for bankruptcy, KeyMash, a traffic acquisition consultancy run by the former LittleThings CEO and two other employees, filed suit over $116,780 owed to them for services. A handful of other companies sued RockYou for unpaid bills.

But the bankruptcy filing does not list LittleThings or any of the other acquisitions last year, nor does it mention gaming sites like Bakery Blitz or Zoo World.

Instead, these parts of the business may have been resurrected under different entities. Some former employees of RockYou and LittleThings list Wild Sky Media as an employer. Similarly, some of RockYou’s games and employees are affiliated with PopReach.

RockYou’s ad network may be dead. But its other “declining” businesses, mobile games and digital media live on for readers, viewers and players.