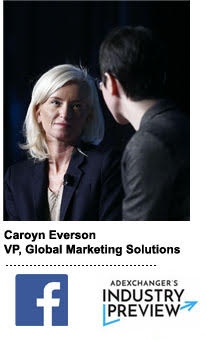 When Facebook said it would change its news feed algorithm to prioritize users’ families’ and friends’ posts, advertisers worried it would also affect how paid placements are bought and sold.

Would this reduce the amount of available inventory? Would it drive up costs?

“The ad game isn’t going to change,” she said. “If you take a real step back, on the ad side of the business, the [ad-ranking] algorithm has always tried to optimize in terms of the value to people.”

As always, she said, the more relevant the creative is to its target audience, the lower the price an advertiser will pay.

Facebook defines meaningful interactions as content that elicits a positive reaction from people, and while that typically entails content from friends and family, it could also include brand messaging.

“A meaningful interaction could be and often is a new product or service you want to buy,” Everson said.


So, brands must do a better job figuring out how to create content that resonates.

The company’s mission used to be connecting people, Everson noted – but that’s not good enough in today’s divided society: “Connecting people to what?”

Cross-Platform Measurement And Other initiatives

Everson also outlined Facebook’s focus on other issues heading into 2018. She anticipated that cross-platform measurement will be a top advertiser request.

“Last year was about getting the third-party verification and getting [accreditation from] the MRC,” she said. With much of that infrastructure work completed, Facebook can focus on building cross-platform measurement and attribution.

The problem is that there isn’t a common system of measurement running across platforms, and that’s an issue Facebook hopes to further address in 2018.

As for other KPIs, such as viewability, Everson noted that traditional companies tend to focus on it more than digital natives.

“When I talk to Netflix, Airbnb and Amazon, they know exactly what happens when they put a dollar into our system,” she said. “The more traditional companies who don’t have a closed loop, who don’t have the end retail data, need to use proxy measures. Viewability verification never comes up with the disruptors, but often with the more traditional companies.”

And if there’s one thing advertisers want from Facebook, it’s access to more data. Everson drew a line: Facebook has no intention of selling data and will protect PII data, a “core foundation of the company.”

She used a football analogy: PII is at the 1-yard line, and that’s where data sharing stops. But, she said, there are “99 other yards of opportunities to work together.”

Those opportunities, she said, include providing enough data so advertisers can measure reach and frequency across campaigns and assess what they are getting for their ad spend on Facebook versus on other platforms or television.

Facebook will also provide data that can measure brand recognition and attitudinal changes. And it will also furnish data for a brand to measure outcomes – just not at the PII level.

Everson bristled at the industry’s characterization of Facebook as a walled garden. As she put it, Facebook’s policies are less about guarding data and more about protecting its users.

“Our entire business relies on the trust people have to give us their data,” she said.