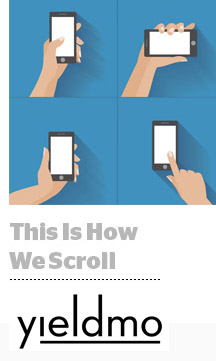 Yieldmo has its eye on your thumb.

For the last five years, the mobile ad startup has been working on a platform that collects and analyzes mobile ad engagement data to gather insights and create segments of the people most likely to convert.

On Monday, the platform and a small group of select partners finally entered a closed beta period that will last two to four months.

Consumers spend hours each day swiping, hovering, tapping, tilting and scrolling on their phones, yet the gestural data generated by all those micro-actions is a blind spot for marketers, said Jeremy Steinberg, CRO at Yieldmo.

“Viewability means than an ad has the chance to be seen, but let’s say I scroll past the ad, stop, then keep going – what does that mean?” Steinberg said. “It’s one thing for a marketer to know their ad was viewed, but the phone can tell you a whole lot more about consumer intent.”

People usually think about engagement as an amorphous term to describe everything from clicks to that warm, fuzzy feeling marketers get when a consumer retweets their tweets.

In this context, however, engagement is defined as anything that happens between the view and a click – even if there isn’t any click.

Certain gestures can be strong indicators that someone is likely to take an action, such as the speed at which people scroll past an ad, how long they dwell and whether they scroll back for a second look. When users are intrigued by an ad, for example, they often tilt the phone, which Yieldmo registers as a subtle change in the accelerometer reading.

The technology works like this: Tags within Yieldmo’s proprietary ad units collect a stream of real-time engagement data that is entered into machine-learning models to find the audiences most likely to take an action.

Each impression is analyzed and scored based on an advertiser’s desired outcome, whether that’s a qualified lead, click or conversion. The algorithm excludes anyone who seems unlikely to engage; there’s no point paying a premium for viewable inventory for a particular audience if the people in it aren’t interested in what they’re seeing.

Likely converters are grouped into segments that advertisers can activate in a buying platform. Yieldmo is live with The Trade Desk and has integrations with AppNexus and LiveRamp on the road map.

Omnicom media agency PHD has tested the platform and saw intriguing results for an automotive client. The auto brand ditched the usual KPI measures, such as clicks and CPM, and instead optimized toward time spent and other engagement metrics.

In the experiment, the target audience was twice as likely to take the desired action, said Craig Atkinson, chief investment officer at PHD.

Although people rarely click on ads, especially on their phones, clicks are still the default KPI for most marketers.

“I’ll hear people say things like, ‘We chose this media placement or this piece of creative because the CTR was .025 versus something else that was .018, so it’s obviously better,’” Atkinson said. “Anyone else in any other business in the world would look at these two numbers and think, ‘The CTR was zero.’”

Marketers are hamstrung by relying on clicks or viewability as proxies for success, said Yieldmo CEO Mike Yavonditte.

Roughly half of all impressions delivered by Yieldmo generate some form of engagement. If a marketer serves 1 million ads to 1 million people, that results in engagement-related events for around 500,000 people. If the average CTR on a campaign is .5%, which is generous, the marketer only gets click data on about 5,000 people.

“It’s a matter of scale,” Yavonditte said. “If you look at engagement, you can derive insights for a large swath of the people you tried to target versus one tiny percentage point.”

That is not to say that metrics like viewability aren’t valuable; marketers just need a more nuanced way to think about them. Combining viewability with gesture data, for example, can help an advertiser settle on a more personalized viewability goal tied to outcomes rather than just ticking the viewability box, said Teddy Jawde, Yieldmo’s head of product.

During the alpha, Yieldmo ran a test campaign that tracked how people engaged with an ad and their browsing activity afterward.

“We submitted that audience to the open market and were able to generate a significant lift in viewability, just by using this data,” Jawde said.