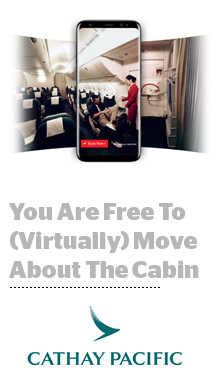 Virtual reality still has much runway to travel before it lands a permanent spot on the media plan. It’s niche.

But for brands like Cathay Pacific, VR content is just the ticket to engage consumers in a new and unexpected way, said Robecta Ma, VP of marketing for the Americas at the Hong Kong–based airline.

“It’s definitely still an experiment, but it’s also an interesting way for us to tell our story,” Ma said.

Last year, Cathay Pacific developed an interactive VR video for its sales team to share with potential clients, particularly those who had never flown on the airline, to give them a realistic sense of the Cathay experience, from check-in to cabin.

The video was a hit with clients, which got Ma thinking about how else Cathay Pacific could more widely distribute its VR assets – which were, Ma said, not cheap to produce.

At the suggestion of its media agency, Universal McCann, Cathay Pacific hooked up with OmniVirt, a VR ad network, that helped the brand repurpose its existing VR content into a series of 360-degree videos that could be delivered programmatically across mobile and be experienced without any extra gear.

The original VR sales video was roughly 15 minutes long. Cathay chopped it up into 1-to-2–minute segments focused on a different facet of the airline’s ground-to-air experience, from the flat-bed seats in business class to the exclusive showers in its arrival lounge.

The purpose of the test was to see if the units could generate brand lift, which they did. Unaided awareness increased by 27%, favorability by 25% and preference for the Cathay Pacific brand by 12%. Visitors spent nearly 21 seconds viewing the ads.

But the effort also drove a significant amount of incremental revenue, which Cathay and Universal McCann tracked by using cookies to connect the ads back to ticket purchases.

Revenue growth tied to the campaign was a surprise, Ma said. She’d been keeping her expectations firmly in check at the top of the funnel on this one.

“We’re absolutely going to see things like VR content and 360-degree video become more performance-based over time,” Ma said, noting that Cathay will consider running more VR experiments. “Something that the industry has mainly seen as an awareness vehicle can also be a DR vehicle that drives purchases.”