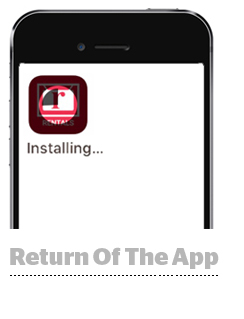 “You can never go home again” doesn’t apply to the home screen.

Most smartphone users – 98%, according to mobile attribution provider TUNE – have reinstalled an app that they previously deleted. Forty percent of users delete and reinstall apps on a regular basis.

But most app marketers don’t differentiate between first-time downloads and re-downloads, mainly because that info has been locked away behind app store walls. Apple only recently began making reinstall data available through its search ads attribution API.

Apple now provides measurement platforms like TUNE with true/false data on re-downloads, which advertisers can access alongside new install data. The Google Play Store doesn’t offer re-download data, although TUNE reports on Android reinstalls by collecting and triangulating other data points independent of what it gets from Google.

Move-owned Realtor.com, which operates one of the top real estate apps in the App Store, is starting to think about how it can use information on reinstalls to optimize its user acquisition strategy and personalize messaging.

Users delete apps for any number of reasons. Sometimes, it’s because they need to free up space on their phone, but far more often, it’s either by mistake or because an app was being buggy. In Realtor.com’s case, people usually remove the app because they’ve successfully found the property they were looking for and have no more need for a real estate service, at least for the moment.

But when those past users decide to move again and re-download the Realtor.com app, it’s extremely valuable for the brand to know that these people are already familiar with its offering, said Melissa Lertsmitivanta, senior performance marketing manager for mobile at Realtor.com.

“We know that, at least now, when someone finds what they’re looking for, they probably uninstall the app,” Lertsmitivanta said. “But if they reinstall at a later time, they already know about our product, which could make them more valuable than acquiring a brand-new user.”

By weaving reinstall data from TUNE into its UA plans, Realtor.com can figure out which users to acquire at a premium. It some cases, it might actually make sense for an app marketer to pay a little more to reacquire users.

“The next step for us is digging into the data to see where the different payout opportunities are for different users and whether we should actually value reinstalls higher than regular installs,” Lertsmitivanta said.

Most app reinstalls (65%) are driven by search, according to TUNE data, which means search ads in the App Store are a fairly reliable way to get in front of a previous user with intent to reinstall.

Realtor.com already spends most of its ad budget on paid social and search, with search in particular serving as a “good way to stay top of mind, especially with more qualified users,” Lertsmitivanta said.

But after reacquiring a former user once, app marketers should focus their energy on keeping that user in the fold. The more time someone spends with an app, the more loyal they’ll be over the long term, if you can get them to stay, said TUNE CEO Peter Hamilton.

“Time spent is a big part of the equation,” Hamilton said. “If your relationship with users is strictly transactional, you’re going to have a hard time keeping them with you, even if they like your service, which is why every brand has to think about mindshare – understanding what is going to capture attention and keep people coming back on a regular basis, particularly people who have gotten over the hump of downloading an app for the second time.”