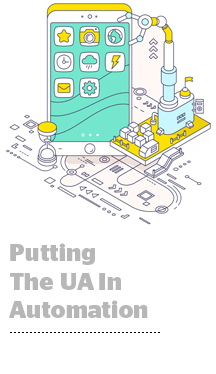 The robots are taking over user acquisition on Facebook and Google, and that’s (mostly) a good thing.

Whenever one of the large platforms automates an aspect of UA, it means more time for focusing on strategy and creative rather than drudgery, said Jess Hasenplaugh, head of UA at Berlin-based mobile game studio Wooga. “I’m happy when the stuff I get tired of doing manually gets automated,” she said.

Wooga spends the bulk of its budget on Facebook and Google AdWords, around 35% and 40%, respectively.

But set-it-and-forget-it buttons come with a loss of control.

Earlier this year, casual gaming studio FreshPlanet put all its budget against a test of app event optimization, a Facebook product that lets app marketers target install ads to the people most likely to take specific actions. Facebook claims the tool generates the best possible return, but FreshPlanet said it saw results when it manually controlled the bidding.

Manual control is not where the industry is headed, though.

For the last few years, both Facebook and Google have been layering more automated functionality into their UA offerings to streamline budget allocation, automate ad placement and adjust bids on the fly.

Automatic placements are par for the course across Facebook and Google, and both have AI tools that optimize ad delivery toward the users most likely to spend money in an app after they download.

Facebook rolled out campaign budget optimization at the beginning of the year, and, in 2017, Google started requiring that all paid app-install ads run through Universal App Campaigns, which uses machine learning to automatically decide when and where to run app campaigns for the best return.

Advertisers have a few levers they can pull to exert control over their bids.

Marketers can devise little hacks to get around the automation. It’s not possible to manually exclude YouTube placements through UAC, for example, but if marketers don’t want to run video ads on YouTube, they can simply make sure not to upload any horizontal video as part of their campaign, Hasenplaugh said.

App marketers can also target by language and decide what metrics to buy against through UAC – either cost per action or target return on ad spend – or set minimum spend against ROAS for ads targeting potential whale spenders on Facebook.

But now that automation is the name of the game, the primary lever at the marketer’s disposal is the creative, said Brian Bowman, CEO of Consumer Acquisition, a Facebook and Instagram marketing partner that mainly handles UA campaigns.

“As the duopoly’s algorithms get better, creative is the next logical thing that can provide the best and biggest bump for an advertiser’s performance,” Bowman said.

Over the last year or so, Consumer Acquisition has been rejiggering its platform to focus more on creative services and transitioning its creative marketplace from static ads to video. It’s a necessary move for the company and others like it.

Consumer Acquisition, like many of its competitors, got really good over the years at gaming the Facebook ad auction. The strategy hinged on running an enormous volume of ads – in some cases thousands of ads simultaneously – against hypersegmented audiences that often overlapped and on changing up the bids multiple times per day depending on performance.

In that way, the company was able to build a complex system to game the Facebook algorithm – “it was not unlike a stock market trading platform,” Bowman said – and it worked really well for clients … until it didn’t.

In mid-February, Bowman and his team noticed that their campaigns were suddenly tanking. Facebook had tweaked its algorithm to reward broader targeting, fewer ad sets and fewer intraday campaign changes. Advertisers that followed those new best practices started to see way better results and others were penalized.

“I think there’s going to be a significant fallout in the coming months for companies that focus on ad tech solutions for the duopoly,” Bowman said. “Native platforms are always going to do optimization the best, but that makes creative king right now – and the good news is, winning creative can’t be generated through machine learning or AI – at least not yet.”