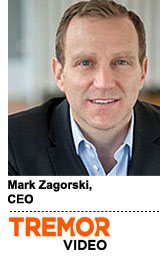 Tremor Video has hired Mark Zagorski, the former CEO of data management platform and exchange eXelate and current EVP of the Nielsen Marketing Cloud, as CEO. He will begin July 10.

Tremor, a video ad platform that more recently began focusing on the sell side, has had a vacancy at the top since February, when it revealed longtime CEO Bill Day – now the COO of JW Player – was out and an interim search for Tremor’s new chief underway.

At eXelate, Zagorski helped spearhead its $200 million sale to Nielsen in 2015. The measurement company built its marketing cloud infrastructure atop eXelate’s DMP and other analytics Nielsen acquired.

At Nielsen, Zagorski was one of the execs responsible for productizing and commercializing the marketing cloud, which today competes with Salesforce, Oracle and Adobe.

Although video may seem like a departure from Zagorski’s more recent experience in data and advertising effectiveness, earlier in his career Zagorski served as president of Worldview, a company that developed streaming solutions for local TV stations.

Zagorski said he was ready to tackle a new category undergoing disruption.

“From looking at this space more as an observer, there’s nothing but opportunity in video,” Zagorski told AdExchanger. “The market’s growing and there’s a need for high-quality, premium video and the players who can participate there outside of the walled gardens like Facebook and YouTube are going to do quite well.”

Tremor, which once competed with other video ad networks and demand-side platforms, such as YuMe and TubeMogul, is gunning for more top-tier publishers as it emphasizes its video supply-side platform.

One opportunity is over-the-top TV providers and virtual MVPDs – such as Hulu and Dish’s Sling TV, which both use Tremor’s SSP – as these companies construct their advanced TV stacks.

Although evolving from Tremor’s earliest iteration as an ad network to a programmatic platform did not happen overnight or without challenges, Zagorski said Tremor’s earlier leadership team already covered the hardest parts of growing a public ad tech company.

Now it’s about execution and maintaining momentum. Tremor’s Q1 revenue increased 20% year over year to $41.4 million, thanks in part to expansion of its publisher relationships.

Tremor’s next challenge is continuing to innovate.

“How do you bring a product to market and how do we better bucket solutions so they’re more easily digestible by marketers and publishers?” Zagorski said.

“We’ll continue to innovate and invest in technology. Doing so with a true, financial goal in mind is something I’ve done for years both at lean startups and large organizations driven by quarterly earnings.”