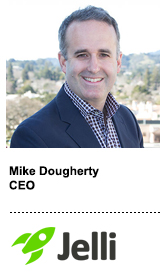 Jelli is taking the old-school medium of broadcast radio into the 21st century.

The programmatic radio platform launched in 2014 to automate and target traditional radio buys. Now, it has a demand-side platform as well as ad servers installed at 2,300 radio stations across the country. It also powers radio’s two major programmatic exchanges: Expressway by Katz, run by radio sales rep firm Katz Media, as well as a private marketplace from iHeartMedia.

“Every major radio group in the US is using Jelli to sell programmatically,” said Mike Dougherty, Jelli’s CEO. “That scale is significant.”

The ad is then ported over to the corresponding stations’ ad servers, where it’s stored until activated based on real-time availability and targeting parameters.

“The inventory is live,” Dougherty said. “When you see it available in the morning, you can buy it then. You don’t have to have approval from a sales team.”

Jelli also makes radio advertising more measurable by letting buyers know when their ad ran and how many people heard it. Prior to Jelli, radio buyers didn’t even know if their ad ran at all.

“You get a real-time data output that says, ‘My ad ran right now in Boston and here’s how many people heard it,’” Dougherty said. “I can marry that against website traffic or sales information. That’s one of the value propositions of having an ad server in every radio station.”

Jelli plans to stay on top of audio and radio trends by making digital streaming inventory available through its platform and closing the loop on sales for brands, Dougherty said.

MIKE DOUGHERTY: Audio is going through a renaissance. Technologies like voice are disruptive. This year, more connected speaker devices and the connected car are opening up.

On the radio side, [we have] scale and data. Our DSP makes something sold offline in the past on demand and very much like the digital process. You’re seeing bigger players start to [ask], “Is this something I can use for all of my radio buying?”

What kind of inventory do radio sellers make available? Do they view programmatic as a remnant solution?

It’s about 10 to 15% of their premium inventory. They don’t want to put in remnant because of their specs. If McDonald’s wants to advertise the Egg McMuffin in the morning, they need prime time and they need to provide enough inventory on stations people are familiar with and have reach in the right cities.

How do you use data in your buys?

It has to do with indexing. Once you ask for [an] audience, our platform will look at the entire footprint [of US radio sellers on our platform]. Then it will look at availability based on other campaign specs, as well as price, and come back with the optimal plan.

You can modify it. You can add additional exposure in New York, for example, and see what that looks like.

Do you have enough scale to target on local stations?

We can get pretty granular. You can buy one station on the platform.

Do you ever run into frequency capping issues because of low demand?

We have to regularly manage [frequency]. Also brand separation: making sure two big-box retailers don’t run back to back, or the same retailer doesn’t run back to back or even in the same hour. Each exchange has its own policies on those rules. Our systems are configurable to those policies.

Sometimes there’s too much demand and flooding [a station]. During tax preparation [season], for example, advertisers go in heavy. It’s helpful to have algorithms enforcing that separation and brand protection automatically.

How do you navigate agencies? Do you work with broadcast or digital teams?

Most people using Jelli are from the traditional media side. They buy TV and radio and have most of the audio budgets that run through their departments. Digital agencies view it as an extension of their strategy.

How much education do you have to do in the market?

The agencies get it. The sellers get it. There’s still education at the client, usually done by the agencies. We’re going to be more aggressive in trying to educate and evangelize with brands.

How are buyers reacting to programmatic radio? Are they interested?

Everyone views it as an obvious next step. Real-time reporting for ads on the air is useful. Logging in to a tool to access the entire radio industry and do targeting and analytics is useful.

For an advertiser who has never used radio before, it’s a way for them to jump in and feel like they’re doing a digital buy. If they’ve been using radio, [they want] the campaigns they were used to buying before. We built a lot of workflow elements that allows legacy buyers to migrate their process.

Will you ever sell digital audio too?

That’s a big push for us to help the industry innovate. If you’re buying a large-scale radio campaign, you’d be interested in potentially adding an audio streaming allocation. Wouldn’t it be nice to do it in one place with analytics that share a consolidated view of your audio spend?

Podcasting is also a huge opportunity. If you put [a podcast] in your archive and a year later someone is listening, you’re still running the same ads. They probably didn’t pay for those new impressions. The ability to monetize a catalogue is a huge business that’s not yet figured out at scale.