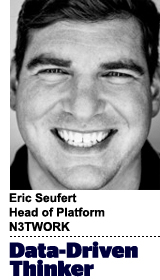 Today’s column is written by Eric Seufert, head of platform at N3TWORK and owner of Mobile Dev Memo.

Shortly after Christmas, Aram Zucker-Scharff, The Washington Post’s director of ad engineering, launched a viral jeremiad on Twitter against the ad tech industry in response to a New York Magazine article, excoriating ad platforms to agencies, measurement companies and even advertisers for propping up an ecosystem that, at its very core, he sees as “fake.”

To performance marketers, however, much of the indignation over misrepresented or misstated top-of-funnel metrics such as video views or Comscore audience estimates seems like a tempest in a teapot. Yes, some metrics are “fake” but, for the most part, performance marketers don’t care.

That’s because top-of-funnel metrics, such as video views, which Facebook admitted in 2016 to overstating, play a fairly trivial role in performance marketing. They are interesting to benchmark but mostly immaterial on their own.

And while it’s wholly unacceptable that top-of-funnel metrics – or any metrics – should be misrepresented, a sturdy business model isn’t dependent on them or susceptible to harm if they’re inflated. Top-of-funnel metrics are especially irrelevant on mobile; the most successful consumer verticals on mobile, including travel, direct-to-consumer commerce, gaming, dating and streaming video and music, operate on marketing models that are fundamentally performance-oriented and immune to measurement impropriety and high jinks.

Many of the issues associated with “fake” metrics have mostly been surmounted with modern marketing frameworks. With advertisers increasingly turning to algorithmic, event-optimized campaign types, such as Google’s Universal App Campaign and Facebook’s App Event Optimization and Value Optimization bidding strategies, top-of-funnel metrics seem ever more commercially insignificant. Ad platforms under these frameworks get paid for confirmed actions, such as purchases or registrations, which are auditable by advertisers and very difficult to falsify.

Given this, it’s easy to understand why marketers’ outrage after each new revelation of platform foul play is typically so muted, relative to the frenzied panic in other corners of the industry.

The “fake” metrics tweetstorm underscored not so much the rampant abuse within the ad tech ecosystem but instead this fundamental and absolute paradigm shift in modern performance marketing. Ellen Pao, former Reddit CEO, responded to the tweetstorm by affirming, “It’s all true: everything is fake,” and lamenting that mobile web user counts are unreliable because users are assigned new network addresses and thus double-counted when they switch cell towers.

Rather than serving as a damning indictment of a corrupt industry, it was an admission that Reddit had not fortified its business model against entirely predictable measurement problems in the same way that every other mobile content publisher had: by moving user engagement into an app.

Of course, bad actors do exist within ad tech and some companies are indeed being defrauded. For instance, attribution-related fraud, where bad actors steal credit for mobile installs they didn’t drive, can mask the dismal performance of an advertising channel. But even this type of fraud is relatively contained and easily avoided by performance advertisers that make the requisite investments in their analytics infrastructure.

But in terms of “fake” metrics, their impact is not evenly distributed: The companies whose business models are supported by performance marketing – not impression purchasing – and operate with the flexibility to adapt to ecosystem changes and evade measurement challenges are mostly exempted from the pain of “fake” metrics.