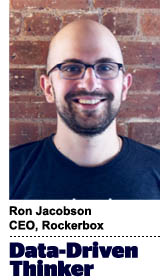 Today’s column is written by Ron Jacobson, CEO and co-founder at Rockerbox.

Every couple of years, the foundations of online advertising are completely ripped apart. This time, it’s the impending death of third-party cookies and the de facto deprecation of Apple’s IDFA.

Digital advertisers are scrambling for a new identifier. But maybe it doesn’t need to be invented.

The ad industry is already eyeing email as a potential marketing currency with more durability than the third-party cookie.

Scale is an issue, of course, but putting that aside, the benefits of email are clear. For years already, email has enabled advertisers to market directly to customers and to create Custom Audience on Facebook and Instagram. Publishers big and small, from The New York Times to local newspapers, can reengage site visitors and woo them into subscriptions.

But there’s a big question here: How can email be applied to paid media?


To start, every advertising channel that was previously reliant on IDFA or cookies for attribution would need a way for advertiser and publishers to compare the email addresses of converters with those who were exposed to ads.

For the large social platforms (i.e. Facebook, Instagram, Snapchat) this isn’t a big shift at all. For one, users are logged in so the platform knows the email of everyone who’s been served an ad.

Advertisers are already sending email addresses associated with every converter to these platforms. All the data is there for the social platforms to know if the converter was exposed to an ad or not. The main difference here is that advertisers are using a conversion event, such as email capture, sign-up or purchase, which is further down the funnel, rather than the IDFA associated with an install.

For programmatic buys, advertisers could upload their email lists to DSPs.

These emails could be matched against an email parameter that would be added to future versions of OpenRTB. This is already happening now to an extent, with advertisers uploading customer lists to companies such as LiveRamp in order to create targetable segments.

And for direct site buys, it’s even simpler. Publishers that only allow logged-in visitors know the emails of everyone who is served an ad.

But regardless of how this shakes out, there’s an elephant in the room: Regulation.

Although email should technically win the currency race because it’s a more accurate way to transact, privacy regulations will probably stop that from happening.

And beyond government regulation, such as GDPR in the EU and the CCPA in California, the platforms are making their own moves.

As Apple has shown both through IDFA changes and its App Store policies, platforms have the ability to dictate the rules that everyone else has to play by.

Speaking of Apple, though, if it had its way, there’s no doubt it would prefer that all apps exclusively leverage its privacy-first “Sign In With Apple” offering. Email for the win, right?

Perhaps. But the biggest challenge of all comes from a corner of the world that the ad industry often forgets to consider: The consumer.

Will consumers be comfortable sharing their email address with apps, publishers and ecommerce companies at the scale necessary for email to become a viable online identifier? I think so as it's already practically happening. The larger question is whether consumers will be comfortable with their emails being shared across providers. Or will consumer apathy to privacy lead to an outcome where regulators have to decide?

Only time, consumer preference and regulators will tell.