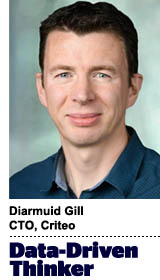 Today’s column is written by Diarmuid Gill, CTO at Criteo.

Since web browsers were released over 25 years ago, they have amassed a significant amount of power. They’re sources of both supply and demand, all while holding the key to user data.

This power gives the browsers huge influence over how users will access the internet in the future. And as the industry discusses how to evolve advertising beyond third-party cookies in a user-centric way, it raises the question: Is it even a game when one team can play offense, defense and referee?

Sports metaphors aside, using an independent third-party to be the gatekeeper of the ads process isn’t a radical idea – Criteo recently championed this approach in the W3C through our SPARROW proposal.

Having an independent gatekeeper gives transparency and much-needed control back to users. This entity would uphold the value exchange between them, the advertiser and publisher, allowing the ecosystem to remain neutral in terms of advertising-related data collection.

Today, browsers are proposing a one-sided view of privacy based on their worldview, rather than any cross-industry approach. Many of these companies have strong commercial interests, either directly through advertising or through revenue from app store subscriptions, so they are far from independent.

The browser proposals being discussed in the W3C also jeopardize the value exchanges that power the internet.

Browsers will need to restrict the number of advertisers that can participate in an auction, which reduces revenue for publishers. Couple this limitation with browsers not letting advertisers deploy advanced bidding models server-side due to performance reasons, and users will get a lot less free content.

And advertisers will have more difficulties detecting fraud and knowing where their ads are being shown.

Sure, users want visibility into what data is being stored and more control over how their information is being used, but that doesn’t mean they want to jeopardize their access to free content. After all, this is what the internet was founded upon.

With the introduction of a new, independent gatekeeper, this dichotomy doesn’t have to be mutually exclusive.

By removing the browser from decision-making in advertising, the industry can protect users’ privacy. The gatekeeper would be responsible for protecting and anonymizing campaign-level data on users, ensuring that the ad ecosystem never has access to users’ personal information.

But if browsers start handling the bid requests, they’ll need to download all the digital assets required for potential advertisements and process significantly more data, slowing page load times and draining users’ batteries across devices. A gatekeeper would store the assets needed for displaying ads, removing the burden from users’ devices.

Bringing an independent gatekeeper into the fold could also provide more controls to users in the long run – from how their data is shared to how they opt-in and out of advertising to customize their ad experience.

Any independent entity that executes real-time bidding and maintains control over bid-stream data must be neutral and must not coordinate with others in the ecosystem. A gatekeeper could be a third-party such as a cloud service provider or SSP, given their existing technological infrastructures and preexisting integrations with publishers, acting as an intermediary with the advertiser.

And there will most likely be multiple gatekeepers.

Ultimately the industry participants should have a choice as to who should be their gatekeeper, with transparency and adherence to the principles of operation being key. Each gatekeeper should be audited regularly by cross-industry bodies such as the IAB or the MRC.

Unlike browsers, the gatekeeper would need to ensure they do not reuse any user data, which could be safeguarded through a dedicated governance. This new entity would likely receive some service provider fee and would have no interest in gamifying or bending the rules because their whole business depends on them being a trustworthy partner.

The ad industry is at a crossroads. After nearly 25 years of browsers calling the shots, it’s time for the industry to collaborate on a more privacy-centric internet. The industry can either take the easy path – working off existing concepts and infrastructures built in the 90s – or take the hard path, reimagining an internet that puts the user’s interest in front of the industry’s.

Some might believe that browsers simply will not give up control, but we need to fight to make this a reality. A gatekeeper could very well happen. In early August, Google engineer Michael Kleber, who is behind the TURTLEDOVE proposal, said in GitHub that Google is “very willing to explore the possibilities for a ‘trusted entity outside of the browser’ as part of the Privacy Sandbox” – with the added caveat that “not all trusted entity ideas are the same.”

The future of digital advertising is upon us, but it will require industrywide collaboration. Let’s meet this moment the right way by banding together and figuring out how to make an independent, third-party gatekeeper feasible.