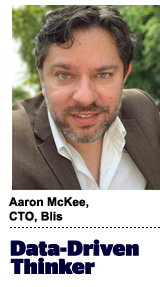 Today’s column is written by Aaron McKee, CTO at Blis.

Snapchat disappointed us all last week and Facebook did the same on Monday.

The social media giants keep making the headlines as they struggle to take privacy changes as seriously as they should. Snapchat’s earnings were the first to confirm what investors were most afraid of – that Apple’s AppTrackingTransparency framework is having a material impact on revenue and creating both reach and measurement challenges.

It’s the same story over at Facebook, which is predicting lower-than-expected revenue for the fourth quarter.

Snap and Facebook’s results are not just an indication but rather clear evidence of the urgency with which companies need to adopt a truly privacy-first approach to data and measurement.

The biggest selling point of the major tech players has always been the ease of audience targeting and precise campaign measurement for which marketers have grudgingly sacrificed transparency and cross-channel flexibility.

But with both targeting and measurement changing due to tectonic shifts around privacy and personal data, companies like Facebook and Snapchat seem late to the party in having an actual plan – and marketers have been left to feel the pain.

Here are a few things you should consider so that you’re not beholden to Big Tech’s decision-making and lack of foresight.

Facebook had mixed results in the third quarter. Although Facebook generated just over $29 billion in revenue and increased its count of monthly unique visitors, it reported a lower revenue estimate than we’ve seen in a long time – resulting in stock prices going down by 5% on the day after earnings were reported. (The stock came back up in after-hours trading.)

These results are not surprising, considering that up to 80% of iOS consumers and more than half of users on the web are already unreachable and unmeasurable using third-party cookies and other advertising identifiers.

These missing consumers are some of the most valuable to marketers, and Facebook’s slowing growth indicates that we have what I’d call a “today” problem, not a “tomorrow” one.

With a dwindling pool of identifiable users, the cost of reaching the right audiences will no longer back out. But marketers that broaden their horizons by finding ways to build privacy-first audiences will see increased performance and better return than those using legacy techniques to fight for lower prices across ad exchange platforms.

We still don’t know what the future holds for Facebook and Snapchat. What we do know is that they’re scrambling to make monumental changes to how they target audiences and measure campaigns in an effort to follow new privacy rules.

This is an existential crisis for the large ad platforms. Their reliance on third-party cookies and mobile ad IDs means that, as of today at least, they are no longer able to offer the hyper-personalized solutions and extremely granular measurement and reporting they did before.

A chance to level the playing field

The latest earnings and stock fluctuations have spotlighted what happens when the ad industry relies too heavily on just a few players. But most importantly, it’s brought attention to how poorly these huge companies have dealt with privacy changes thus far. This is now impacting everyone in the market, even those previously considered untouchable.

The pressure is on and the playing field is leveling. As this happens, marketers and the rest of the advertising industry need to fundamentally question how and where they allocate media funds.

It’s time for marketers to diversify.

Those who stay tied to the past or are late to evolve may find themselves way behind the eight ball.

I’d be delusional, of course, not to recognize the power of the big walled gardens. But it’s also delusional – and self-destructive – for brands to rely too heavily on walled gardens to reach their audiences.

It’s time for brands and media planners to question what they truly expect from their partners. For years, marketers have put up with closed-door decisions and opacity. But with so many changes – and with privacy issues becoming ever more pressing – the pristine walled gardens are starting to sprout some weeds.