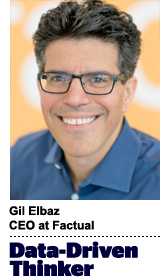 Today’s column is written by Gil Elbaz, CEO at Factual.

Many believed that the General Data Protection Regulation (GDPR) would protect consumer privacy, rein in behemoths like Facebook, Google and Amazon and give competitors more of a level playing field.

At this point, it appears they were wrong. The fourth-quarter earnings from the world’s biggest digital platforms showed what many marketers have suspected since GDPR went live last May: The regulation helps the tech giants more than it hurts them.

In Q4, Facebook’s revenue grew 30%, Google saw a 22% increase and revenue for the business unit that includes Amazon’s advertising nearly doubled. Facebook is showing it can grow revenues across the pond even as its total number of users flattens. It saw European ad sales up 28% in Q4 compared to the year before.

The walled gardens are thriving even in this post-GDPR environment where advertisers have fewer choices and are forced to compete (and pay more) for access to inventory. These digital behemoths are clearly winning when it comes to acquiring user data and talent.

As they continue to strengthen their foothold in the ad tech and mar tech marketplace, they also affect the recruiting battleground for data scientists and AI specialists. The oligopoly's Q4 ad sales are a canary in the coal mine for smaller or even mid-sized players seeking top-notch talent in our space.

More power to out-pay for data and AI stars

Data is a valuable resource, and Facebook, Google and Amazon have been incredibly successful at getting it from consumers. As the value of data grows, so do the salaries for data scientists and other technologists ­– often topping six figures – who build services on top of that data.

If smaller companies have a harder time accessing data due to strict data-sharing laws, that hurts their ability to earn the revenues needed to pay for technology talent. On the other hand, Facebook, Google and Amazon can afford to pay the cost for talent. It’s a vicious cycle.

Smaller players will have to dig deeper into piles of resumes and come up with new ways to find the industry’s up-and-comers and hidden gems. It’s going to be a challenge for ad tech and mar tech players going forward. HR pros will have to be more strategic in how they attract talent out of the MITs, Carnegie Mellons and Stanfords of the world.

Embolden innovation with fairer policies for all

GDPR inspired California legislators to pass a law last June that went almost as far, giving consumers new controls over their data in a policy that goes into effect on Jan. 1, 2020. And the state of Washington just introduced similar legislation.

Don’t get me wrong: Users’ consent absolutely should determine if a company gets to use their data, and it’s right for lawmakers to want to make software companies into more transparent players. But we also need to confront the unintended consequences – like the battleground for data and AI talent – from these policies.

At the same time, once these huge companies get consent, they have permission across their portfolio of products, such as Gmail, Google and YouTube for Alphabet’s properties, and Facebook Messenger, Instagram and WhatsApp for Facebook Inc.’s brands. Facebook even plans to make its four apps into a single platform. That would give it the benefit of an umbrella effect that GDPR allows – and which the rest of the ad tech and mar tech world lacks.

If all verified, reputable ad tech and mar tech companies could somehow gain consent with a group of like-minded businesses, the landscape would be more competitive. It’d be the same umbrella effect that Alphabet and Facebook enjoy.

Going forward, few things will determine whether tech companies succeed more than their access to data and, subsequently, talent. We need more than just a few places for our best and brightest to work – there need to be hundreds of companies that can pay them the going rate. It’s the best scenario for the spirit of innovation in the ad tech and mar tech world.