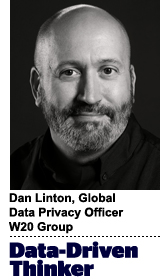 Bemoaning the impending sunsetting of the advertising cookie and decrying the supposed cognitive dissonance of consumers wanting more personalization and privacy at the same time seems to be all the rage in ad tech right now.

“GDPR doesn’t work,” “CCPA will concentrate power even more into the large platforms,” “privacy laws are a datapocolypse,” “we can’t give consumers the personalized experiences they want” – the industry seems more interested either trying to maintain the status quo or coming up with some brilliant new technology that does the exact same thing as cookies.

My friends, I am one of you, and I say this with the love of someone who’s spent his entire career in marketing and analytics: Get over it.

Many responses to the current trends in privacy are far more like lobbying than anything else and not based on truth. After the GDPR came into effect, ad spending and ad revenue rose higher instead of dropping like a stone. A year and a half later, spend in Europe is up 33%. If GDPR is the canary in the coal mine for CCPA, the arguments that the advertising industry will take a major hit are unfounded.

Did the GDPR concentrate spend into the big platforms? Some studies indicate yes, particularly Google, which may have gained a bit of market share vs. small publishers that lost share. That said, before we get angry at Google for making even more money, pause and consider the possible causes. Large advertisers are risk averse – it’s not surprising that big brands, wanting to avoid fines and reputational damage, concentrated their spend with a vendor that they perceive as safer and more compliant.

Because Google probably is more compliant.

Technically, Google doesn’t sell personal information, it sells access to audiences. It has created consumer products and services that have resulted in vast ecosystems with billions of logged-in users that, at least with the legal consent of those users, if not informed consent, allows it to track and profile them for the purposes of advertising. Not surprisingly, Google also has significant resources to apply to dealing with compliance issues (and lobbying). All of this lends credibility to the perception that it is safer (whether true or not).

Does that impact smaller players in the ecosystem? Yes, but those smaller players are also nimbler and could create new solutions and products more quickly than Google. Competition is good, and consolidation can lead to antitrust issues, but at the same time we all must adapt or die. Smaller players are better positioned to adapt more quickly, and innovative solutions likely won’t come from Google (although it may buy it later).

And all the talk of those wonderfully personalized experiences ad tech enables and consumers want? Compared to completely irrelevant ads, that’s probably true – it’s time for some real talk though. Click-through rates (CTR) for display ads on average are 0.05%, and run up to about 1% depending on industry, ad format and platform. Half of all display ads aren’t even viewable – and therefore not clickable.

Yet search ads, which rely far less on behavioral tracking, if at all, are getting CTR averages of 5% (and up to 8% depending on industry) – even assuming a generous 1% for display, search is getting five times the results. Some may counter that those searchers are actively seeking, and therefore more likely to click on ads because they are highly contextual – all true, and search doesn’t benefit from rich media, or even an image in most cases.

Banner blindness, viewability and ad blockers play a role, but the incredibly precise behavioral targeting we love to talk about isn’t that accurate. Even basic demographics are usually far off the mark – often worse than a coin toss. There are also studies that suggest that behavioral targeting can have the unintended consequence of strengthening competition.

Get over it – and innovate

With all those barriers to what we currently know as behavioral advertising – most of which aren’t related to data privacy legislation – it’s time (and long overdue) for the ad industry to innovate. Advanced contextual targeting, better freemium and premium content, intent-based and AI-driven personalization and other solutions are already on the horizon.

Clinging to old models or looking for loopholes will not suffice. People want privacy and relevant ads, and saying it’s got to be one or the other is just an excuse to not adapt. Those who can figure out how to offer consumers both will be Google’s next billion-dollar acquisition target.