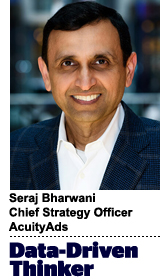 Businesses thrive or die based on the economics of the channels that close the gap between awareness and consumption. In the past decade, direct-to-consumer (DTC) brands have optimized single predominant channels for acquisition that are now becoming crowded with more competition, experiencing rising ad rates for keywords and placements and leveling off with limited incremental growth.

As brands seek alternative channels for customer acquisition, many are testing across digital channels such as online video, display, CTV, native or influencers, with limited success. Advertisers frequently test individual channels in isolation for solo performance gains, which produces mediocre results. It is hardly surprising to hear complaints that online video by itself did not deliver as good of a return on ad spend (ROAS) as branded search, for example, or that connected TV did not make the benchmark for customer acquisition cost (CAC), perhaps because of high CPMs or an influencer channel that otherwise delivered breakthrough economics was discontinued because of insufficient scale.

Hardly any channel, not even branded search or social, can carry the full load of delivering compelling scale and economics by itself these days. If a brand does not have enough top-line, consumer awareness, most acquisition channels will struggle with performance.

DTC brands are addressing the need for broader awareness with media investments in linear and addressable TV. Once past broad awareness, most of the burden for conversion is carried by one or more of the digital channels working in concert through the middle of the funnel to deliver comparable economics. This is the hard work of tracking and hand-holding the consumer through the funnel or the journey.

Channel performance usually varies by the stage in the consumer’s buying cycle, which may ultimately determine the number of reminders and the duration (since the first exposure) needed to acquire.

It is possible to more meaningfully assess channel performance by testing multiple channel combinations – such as desktop video with display or mobile video plus display – while keeping upper-funnel, TV weight constant and using common lower-funnel calls to action, offers, creative assets and audience segments. Such an approach can fully account for a channel’s unique role in the buying cycle and the collective contribution of multiple channels working in concert toward an optimal CAC. In a given category, desktop-video alone may not make the cut, but when combined with mobile display the combination could deliver both scale and high ROAS.

Many DTC brands using desktop video, desktop display, mobile video, mobile display and influencer activations are combining some of these channels with common creative treatments. Brands with greater relative brand awareness will of course generally achieve better performance. Video, both desktop and mobile, serves as a strong prospecting channel for targeted reach. In particular, serving reminders or retargeting messaging as a follow-on complement to video can help deliver double-digit percentage gains in CAC and ROAS, in my experience, compared with performance from video, influencer or display alone when accounting for collective, cost-weighted exposures aggregated through the funnel or journey.

And while influencer channels are generally limited by the number of influencers recruited, using paid media to boost mobile display, as a complement to influencer outreach, is an effective means for scaling acquisitions with solid performance.

Most DTC marketers have wondered if multichannel, mid-funnel strategies could become a scalable next phase extension to their traditional growth drivers such as search (Google/Amazon) and social channels. Not only are they a next phase extension, but cross-channel strategies appear to be an imperative alternative to rising costs and scale challenges. They bridge the space between the upper and the lower funnel and offer a fertile ground for DTC brands to test for cost-effective customer acquisitions at scale.