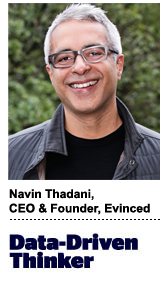 Today’s column is written by Navin Thadani, CEO and founder of Evinced.

To say that interest in diversity, equity and inclusion efforts is growing would be an understatement. If you hop onto LinkedIn, your feed will surely be flooded by professionals advertising their efforts to increase diversity in their workplace.

But one sector remains exclusionary and short-sighted: online ads.

If you have a disability or know someone who does, you understand firsthand that the majority of digital ads are not digestible by someone with an impairment.

That’s a big problem. Chances are high that either you’re affected or that you know someone who is. Nearly one in four American adults – 61 million people – have some type of disability, according to the Centers for Disease Control and Prevention. And here’s another noteworthy stat: Companies without accessible sites are losing an estimated $7 billion a year to competitors whose sites are accessible, as per the US Department of Commerce.

We need to ensure we’re reaching all populations. It’s high time we address the accessibility problems with online ads.

There are numerous accessibility challenges when it comes to modern-day digital ads, but there are four issues that crop up the most.

The first most common problem is that ads are simply not accessible by keyboard. Often, this is because the designer uses poor HTML semantics, such as an inaccessible button or links elements or by not including a proper substitute.This will also affect users of assistive technologies, including those who use screen readers or voice controls.

Another factor is when ad units are put in a sidebar while the main content has an infinite scroll. Users who rely solely on their keyboard will find it tedious or even impossible to reach the ads.

The lack of alt text and closed caption is also a problem. Image-based banner ads tend to be missing alternative text or use generic, ambiguous text, like “click here,” that does not reflect the ad’s content or the ad’s call to action.

This is also true for video ads, where audio is essential for reaching a user. Closed captions are non-negotiable if you want to reach users who have a hearing impairment, but they are rarely used.

And then there’s the focus indication issue. Focus indicators are visual markers that demonstrate to users which element on a web page they should be looking at. Moving through a form field is a good example. But most focus indicators, when they’re even in use, don’t work well, making it difficult or even impossible for keyboard users to know when a unit is focused and actionable.

Finally, the most common problem among web ads is related to animation and flickers. Although ads often use animation and flickers to catch a user’s eye, in some cases when images change rapidly or when there isn’t a proper control mechanism, this could be a violation of accessibility rules.

Ad units are essentially interactive UI elements, so they should meet the same requirements as any other interactable element on a screen – and be accessible to as many users as possible.

Luckily, there are a few easy things you can do to address the problems outlined above.

1. Use proper semantics. In most cases, clicking ad units will open or redirect a user to another web page or trigger a funnel, such as a form or a wizard. To ensure that all users can understand what’s happening, ad units should use an anchor tag (<a>) when linking to another page and button elements (<button>) when triggering the appearance of a form.

2. Ensure there is sufficient focus indication. Users who are not using direct pointer devices, such as a mouse, need to know when an element can be “clicked.” Users will find it challenging to use your site if it includes interactable elements that have poor or no focus indication.

3. Use text alternatives and be clear with your messaging. When an ad contains an image, it’s essential to ensure that image has a valid alt text. In cases when the image is purely decorative, no alt text is required. But when an entire ad unit is based on a single image, it is recommended to use another hidden element that contains the ad description and links to the image as a descriptive element.

These are simple steps to improve ad accessibility for all internet users, but they’re only the first steps.