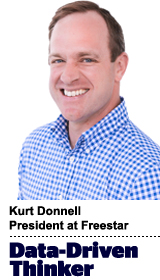 Today’s column is written by Kurt Donnell, president at Freestar.

Right or wrong, the general public associates the term “cookie” with a perceived online privacy invasion. But cookies, along with other tracking technologies, provide the personalized user experiences that consumers crave.

As a result, the same technology that tracks user behavior and allows personalization is seen as bad in one context, but valuable in another.

Now after a decade-long deathwatch, new privacy laws and restrictions from big tech companies might succeed in killing the third-party cookie. But before we bury it, we need to step back and ask what we hope to accomplish by ridding the world of third-party cookies. Will doing so achieve that goal?

To assuage consumer concerns about cookies and provide the perception of user choice, we will likely replace cookies with something new, but we must acknowledge that practically, very little will change. Some changes will likely hurt independent publishers and, to a lesser extent, the consumers these changes purport to help.

In the first half of 2019, US digital ad spend reached $57.9 billion, according to the IAB. Given the size of the market and the belief in the efficacy of targeted advertising, marketers, ad tech companies and publishers have already started investing heavily in new technologies and tactics that allow targeting that’s very similar to that of third-party cookies.

That may take many different forms, some more aboveboard than others. While it is not yet clear if new targeting technology will outperform cookies in a more privacy-oriented manner, the dollars involved guarantee that new technology will be adopted, adding yet another layer to an already complex ad tech ecosystem.

Publishers will adapt, but we may not like the results

That won’t do much for privacy, but until first-party cookie consortiums reach critical mass, power will shift to the biggest players that are relatively immune to the disappearance of third-party cookies.

So, a misguided attempt to stamp out the evil cookie will make Google, Amazon, Facebook and Apple even more powerful. That’s a perverse outcome at a time when there’s increasing public skepticism of concentrated power in tech.

User experience may get worse and concerns will still remain

GDPR was supposed to address certain user privacy concerns, but by many accounts, it has floundered. Most cookie consent notices are meaningless, one recent study suggests. Meanwhile, GDPR notices have made consumers feel as though access to information has become more restricted, according to The Guardian. Add in CCPA and other state regulations that will likely require more frequent user opt-ins, and we appear to be headed toward a “prettiest consent button” contest, not informed consent by users.

There’s also cognitive dissonance at play here. In a recent survey, 63% of consumers described data collection as “creepy,” but other surveys show that an overwhelming majority of users prefer targeted ads and content.

As a result, it seems consumers will continue to embrace tech they claim to mistrust. Banning third-party cookies may give consumers the false sense that their concerns are being addressed, but the lack of substantive change may actually deepen consumer concerns in the long run.

Where does this leave us?

We need to plan for what comes next, whether that’s browser makers preventing cross-site tracking or dropping cookies entirely. But we also need to prepare for the anti-cookie attacks to shift to other tracking technology buzzwords.

Where possible, we need to embrace agnostic approaches to understanding and sharing user data across platforms, thus limiting the concentration of power within a few big companies. That’s easier said than done, but perhaps it’s more feasible than defending the cookie against those who rally for its demise regardless of the actual impact of doing so.