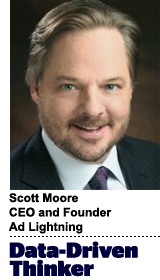 Today’s column is written by Scott Moore, CEO and founder at Ad Lightning.

An open ecosystem offers enormous benefits and has sped the pace of innovation in the digital ecosystem. This openness made digital advertising possible, but is not without a downside: Bad actors can slip in and perpetrate fraud, bad ads and malware at increasing scale.

Given that the programmatic ecosystem is effectively a financial market, there will always be incentives to exploit its vulnerabilities. I know of no other financial market with fewer safeguards to protect both buyers and sellers. The result is a virtual tragedy of the commons, whereby there are many contributors to the problem and no single company that can fix it.

We need more decisive action. Brands, publishers, trade groups and platforms must join together to defeat fraudulent ads in the same way as when they created Ads.txt.

The evolution of ad quality

Ad quality issues have evolved over the past five years from simple noncompliant ad units to the aggressive and pervasive malicious threats that now enter the system daily and contribute to a terrible user experience.

The fragmentation of buy- and sell-side technologies makes it practically impossible to manually track bad ads to their source. The pain has shifted from revenue losses due to page load delays – which are still an issue but not acute – to malware that drives audiences away, ruins the user experience and hijacks unsuspecting brand ads.

Earlier this year, the industry hoped that improved browsers would kill the mobile redirects, but they continue to get more sophisticated. This has a huge impact on publishers. It's not their fault; yet, with the nature of how this malware is served, they are left in the position of having to defend themselves from it, no matter how hard supply-side platforms (SSPs) try to clean their supply.

I often hear people characterize ad quality as a publisher problem or something that the SSPs need to fix, asserting that legitimate advertisers are not the ones introducing bad ads into the system. But brands need to understand that it's often their ads that are getting hijacked and stuffed with malware, redirects and beyond. End users don’t understand that their poor experience with a brand ad was probably caused by a nefarious party, although advertisers sometimes make mistakes with their ad construction and introduce problems.

P&G’s Marc Pritchard and Unilever’s Keith Weed have famously railed about the ad quality problem. Brands need to become more invested in the process. DSPs aren't off the hook either. Policing self-serve systems for fraudulent, bad actors before ad fraud crimes are committed is critical.

United, we can overcome

A few years ago, illegitimate inventory flooded the programmatic ecosystem, leading the IAB, advertisers, publishers and technology providers to create and adopt Ads.txt. While the problem is not 100% eliminated, most agree that the initiative has been a huge success.

With bad ads and fraudulent actors posing a similar type of threat to advertisers, publishers and platforms alike, the industry must band together again and implement a similar type of industrywide solution – perhaps a universal ad registry that follows the same principles as Ads.txt.

For example, an archival system for ads could be built fairly easily with financial support from brands. When any brand creates an ad and wants to run it programmatically, it must pass the ad through a system that scans the ad, records who created and paid for it and saves a copy of the file. This would produce a digital fingerprint for every ad, and publishers could choose to only accept ads that are validated via such a system. Enforcement of quality standards could come from brands requiring SSPs and publishers that run their ads to accept only certified and archived ads. In some ways, this is analogous to brands requiring their programmatic partners not to run ads on controversial sites such as Infowars.

Even if the system did not achieve full market participation, it could considerably reduce the number of programmatic ads that distribute malware or harm the user experience. Such a system would need to be more robust than simple standards, so it would cost some money to build and run, which could be covered by all players in the ecosystem. If brand leaders want to get serious about cleaning up digital marketing, focusing on viewability and fraud detection is not enough. Fixing the problem will require leadership and investment. Technology is not the issue.

I love the idea of an open ecosystem where everyone can collaborate and compete, but we need better guardians at the gate. Marc Pritchard said it best in 2017: "The days of giving digital a pass are over. It's time to grow up. It's time for action."