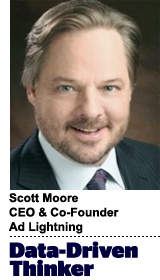 Today’s column is written by Scott Moore, CEO and co-founder at Ad Lightning.

Media arbitrage – buying ad space at one price, adding something of value and reselling it at a higher price to advertisers – has been ad networks’ business model for years.

However, it’s an artifact of the pre-programmatic era that is no longer adding value to the ecosystem. It is instead a vestigial function in today’s programmatic world – extracting value, sucking out the oxygen and contributing to advertiser mistrust.

I estimate there is approximately $10 billion still being made in arbitrage, which suggests the ecosystem is in massive need of cleanup. I predict arbitrage will disappear in the coming years, to the benefit of publishers and advertisers alike.

Ad networks initially made sense. Publishers didn’t have to hire a sales force, and advertisers didn’t have to field sales calls from a thousand online publishers. The networks were the pipes that connected the two at some scale, they took their 30% cut and everyone was fine with that.

But while the networks couldn’t offer true programmatic-level scale, they started pushing data targeting for their inventory. But whose data was it, exactly? The data being collected by ad networks was being suctioned up via the ads they were serving. Just drop a line of Javascript into the creative, and voila, you have a path to a rich consumer data set built on the backs of the advertisers and publishers you did business with.

Consumers didn’t have a relationship with Rocket Fuel or other networks like it, but these companies knew quite a lot about consumers, who had no idea their personal data was being suctioned up and monetized. Consumers are only now waking up to the reality that our every page view, click and geolocation, to name a few, are real-time data points in the possession of hundreds of companies we’ve never heard of.

When programmatic came along, it changed the face of the industry, solved the scale problem and made the vast majority of media arbitrage no longer necessary. Legitimate SSPs, DSPs and exchanges provide an incredibly important infrastructure to the $50 billion-plus programmatic ecosystem. The open architecture of the system and the power of real-time bidding have driven tremendous innovation and value creation.

However, in a complex and fast-moving industry like programmatic advertising, it has become all too easy for upstarts to masquerade as platforms when media arbitrage is their primary bread-winning business mode – this is arbitrage that relies on data as the justification for a price markup. The problem is that the data does not belong to these intermediaries: It belongs to the advertisers and publishers they sit between. For the time being, these companies are hiding their practices in plain sight, knowing that there is no way to prove this data laundering is occurring and no way to enforce the contracts they are breaching.

It’s estimated that $10 billion is running through the ecosystem via arbitrage, even though arbitrage should have gone all but extinct when programmatic was invented. How are they still hanging around?

My expectation is that Darwinism will prevail and ad networks will eventually die out. Media arbitrage will require complete transparency about the nature and source of the value that is being added to the transaction. Providers that use arbitrage to monetize truly legitimate and proprietary data or unique ad formats will leave media arbitrage a small but exciting corner of the ecosystem.

Once these ad network copycats finally go extinct, the $10 billion will not evaporate. Instead, it should start to flow to publishers directly, helping their businesses thrive again. Publishers will make more money without doing anything different. They have been the victims here. Once the intermediaries drop, more money will be channeled to them so they can focus on growing and retaining their audiences with even more engaging content.

The future means the publishers will be back at the table with the brands. Programmatic will still play a major role but buyers and sellers can finally talk to each other again.

There is a mountain and a sea between buyers and sellers today, and that needs to change.