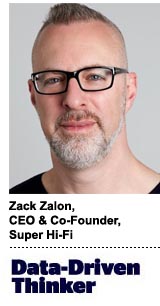 Today’s column is written by Zack Zalon, CEO and co-founder of Super Hi-Fi.

Audio advertising is stuck in a time warp.

There have been no meaningful changes to speak of over the past ten years. In fact, one could argue that audio ads have been effectively the same since the 1970s – an experiential relic of how most audio entertainment was consumed at the time.

The question is, why? Why, in an era of unprecedented and accelerating digital innovation, are audio services still serving up dinosaurs of revenue generation?

While audio has stayed stagnant, video has seen consistent innovation that has helped create a rich digital ecosystem of marketing and revenue opportunities. Think of the skippable video ad that YouTube pioneered a decade ago, providing advertisers with an entirely new form of storytelling and the ability to drive commensurate advancements in targeting, retargeting and bidding.

At the time this seemed like a bold, risky move. But the byproduct was to create a marketplace of new incentives. If your creative didn’t hook a consumer in the first three seconds, then you lost out.

As a result, advertisers today have no choice but to generate more compelling creative, consumers are thereby fed a steady diet of more interesting and entertaining ads – and an entirely new cycle of value has been born.

It’s time for audio services to start innovating in a similar way, and early indications point to the fact that we’re finally on the cusp in 2021.

The ingredients are all there. YouTube recently announced a 15-second audio ad unit. SXM/Pandora, which now owns AdsWizz, would benefit greatly from new and compelling ad units. And Spotify has indicated publicly that there is a huge growth opportunity in the conversion of broadcast radio revenue into music streaming. All of these and more are hints at where things may go as the coming year unfolds.

That said, there is still a question as to what these innovations need to look like, and I’d suggest that the smartest thing to do isn’t to emulate the past 10 years of online video, but to look farther back to the very medium from which today’s audio ads are derived: old fashioned radio.

No matter your opinion of the state of broadcast radio today, it’s still a powerful driver of audio entertainment. Hundreds of millions of Americans still tune in every week, and even during the pandemic there are signs that overall listening has grown.

Great radio is recognizable, compelling, and designed to keep a listener’s attention and interest. This is not to say that radio’s approach to advertising is perfect, in fact far from it. Nobody loves a multi-minute ad break chock full of insurance commercials. But there’s so much more to audio advertising than this one aspect of radio.

Think of the quick sponsorship reads that are subtle, but still noticeable. Think of a contextual ad, perhaps an announcement that a music group is coming to town right before the DJ plays one of the band’s songs. Think of a NPR station, where the sponsor is proudly announced prior to a program kicking off.

These are all audio ads, they’re just contextually more appropriate than what we’re used to in digital. They’re also shorter, tighter and less annoying by far.

Now add in some of the benefits of being online. We can target ads much more effectively, so a short and punchy ad has a better chance of resonating with a consumer.

We also can serve up some interactivity, so that listeners can “click in” for a deeper experience, and to learn more. And we can provide a leave-behind so that even if an ad moves by quickly, consumers have numerous opportunities to connect with the brand after the fact.

In short, there is nothing stopping the industry from moving in this direction and triggering the next generation of audio advertising.

Realistically, though, it will take everyone in the value chain to make this happen. Brands, agencies, service providers and platforms will all have to adopt a new approach.

But the end benefit will be more effective ads, which lend themselves to better listening experiences, which are likely to drive significant improvements in consumer response –and in turn generate more revenue for the industry.

This is the semi-moonshot challenge I hope the industry accepts: Let’s make 2021 the year we commit to keeping people listening longer by bringing innovation to the audio ad space.