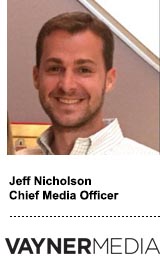 “Most people are looking for operational profitability,” he said. “People are taking a simple approach to [media buying] because there’s no one calling them out on it. The client education is so low.”

Nicholson, who runs the 200-employee media department at VaynerMedia, is fighting the perception that media buying is a commodity by positioning programmatic and social buying as a skill.

Rather than hiring media buyers who grew up sending insertion orders for TV buys, he’s training employees from the ground up on the nuances between programmatic buying platforms. He’s also changing the typical media-buying career path by only promoting former buyers to planning and strategy roles.

“In almost every agency dynamic, you start as a junior media planner and then move up to a senior role, but you’ve never ran a campaign,” he said. “How can you tell brands how to spend? Career development needs to be in line with the inventory people purchase.”

VaynerMedia will grow its media department 52% this year and plans to hire more in 2018 to work with clients like Chase, Amazon, Fox and Anheuser-Busch. This year, the agency will manage $200 million in media.

“When you’re buying in an auction environment, you’re choosing target audiences, data overlays, and you can manipulate that on a consistent basis,” he said. “The more you do that, the more employees you need.”

AdExchanger: How do you train your employees to think about media buying?

JEFF NICHOLSON: I hire a lot of undergraduates and teach them how to buy. It takes having someone that has done it in the past teach you how to do it correctly. That’s rare in this space. Very few people stay a long time in buying. They’re not appreciated in the industry; it’s not a high-paying job.

How do you keep your buyers around?

I pay buyers more as they move up and then transition them into a planning and strategy role. Every media planner should have [experience] buying across 80% of the inventory pools they’re going to invest in.

Do you train buyers on a preferred platform or do you buy across the ecosystem?

We buy natively across every digital walled garden. People pay so much money to do things around those platforms when they could work directly with them and get twice the value.

How do hold those platforms accountable?

I don’t think the transparency problem is with the platforms. I think it’s how people buy to get to the platform.

When you’re using a demand-side platform, you’re buying across hundreds of thousands of websites. Where are those? If there’s a safety concern on YouTube, where are you going to go next? Programmatic is riddled with fraud and waste because very few people understand it. It’s judged around a light CPM benchmark and viewability.

Will that eventually squeeze out the agency?

The agency space is going to change. It’s oversaturated with very limited skill sets and people are sick of getting ripped off. The more people look under the rock, they’re going to realize they can hire themselves or invest in a road map that will streamline costs and improve performance. I don’t think you should get paid to defend a territory that you can’t add value in.

You said client education is low. How are you changing that?

We’re transparent. The client owns everything they want. I promote them to have direct contact with Google, Facebook and their DMP. They need to be in control of their business. We should be a value add on top of it.

If you don’t invest in what you pick, you can pick the best thing for performance. That might be predicted on integration with other [technology] or the vertical they play in.

Gary Vaynerchuk, VaynerMedia’s CEO, invests in a lot of businesses. Does that ever cause a conflict of interest?

I’ve fired several of his investments. Gary is covering the marketplace. I push against that more than anyone. Ryan [Harwood, CEO of PureWow,] has lost more pitches with me than with other agencies, because if I’m going to promote him, he has to win by a larger margin.

What’s the relationship like with PureWow? Are there data synergies?

It’s early. They’ll be a subsidiary of VaynerX. We run a large portion of their media investment. How does any publisher get traffic? They spend a lot of money on Facebook, Google and other platforms.

We keep data walls separate. I treat PureWow just as I treat any other client. We only have media performance data and we share that with the teams.

What’s the strategy behind VaynerX? Are you going to buy a bunch of agencies?

We don’t want to be a holding company in a traditional sense. We want to become more of a private equity firm. We’re thinking about [buying] brands with distressed value and no investment. How do we revitalize that and then leverage our advantage in marketing to add value?

A large piece of those businesses now is digital operations. When you don’t know anything about that, you have a very difficult time competing. If you don’t have the ability to adapt to a Google- and Facebook-centric world, you’re going to have a big problem. We’re building our agency to learn what works so when we purchase a brand like PureWow, we can apply those things. Media investments are not a cost-cutting play, they’re a revenue play.