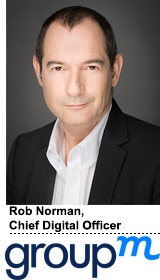 Don’t tell that to Rob Norman, chief digital officer and veteran of WPP’s GroupM, who said Monday he will step down from his full-time role to become a part-time adviser for the company.

But even if agencies aren’t having a near-death experience, they should behave like they are, Norman said: “If you don’t assume you’re on war footing, that’s a mistake in a time of radical change. You ask yourself if your strategy is right and if your execution matches your vision and make tough decisions to do that.”

Norman began making those tough decisions at WPP in 2001 after it acquired the digital media agency CIA, where he worked at the time. He served as chairman of media agency MEC in the UK and CEO of GroupM North America before becoming chief digital officer of GroupM in 2012. He will continue to advise GroupM clients and other companies such as the BBC.

At GroupM, Norman’s pointed thought leadership and prescient understanding of how digital media would change the advertising landscape was integral in guiding clients – and GroupM – through disruption. He was on the team that led the acquisition of 24/7 Real Media in 2007, which would become GroupM’s trading desk, Xaxis, and the heart of its programmatic operation.

As Norman steps back from a full-time role in agencyland, he has high hopes for media agencies despite a less-than-stellar financial year for holding companies.

“Anyone that thinks that we are a moribund sector, the coal miners or mall owners of our time, is mistaken,” he said. “The role of the media agency to have visibility across categories, geographies, channels, vendors, tools and services, and to be both the agile integrators of technologies and the passionately neutral observers and combiners of platforms, is vital.”

AdExchanger: What point is the advertising industry at in its evolution?

ROB NORMAN: We are in a transformational period about the platforms and data sets we deal with, consumer behavior, the way we measure, the mechanisms for trading and the migration from upfront to auction-traded markets.

The sector has been sniped at excessively from the outside. It’s been sniped at by businesses that are under pressure and think they can alleviate that pressure by passing it on to someone else. The business is in a massive transformation, but I think it will emerge different and more vibrant. I think media agencies are only going to be well placed if they choose to disrupt themselves.

How can agencies remain an essential part of the ecosystem as they deal with continued pressure from their clients?

Businesses that are now super successful have had near-death experiences. You don’t have to look further than Apple to think about businesses that got to the verge of collapse.

The people who have made it have a combination of guts and vision. I look at Kelly Clark [CEO, GroupM], and people like Amanda Richman [CEO, Wavemaker], Adam Gerhart [CEO, Mindshare], Sasha Savic [CEO, Mediacom] and Christian Juhl [CEO, Essence], and they’ve got guts and passion for sure.

What’s the future of advertising?

The single word is relevance. People will respond to things they find relevant, whether that is something I need right now, something that speaks to my emotional needs or made me laugh. Relevance in an algorithmically driven world is things more likely to elicit a response which, in turn, creates value for the consumer, the platform and the advertiser.

How do you stay relevant when media consumption continues to fragment?

How will the duopoly dynamic in the industry play out?

Nothing is forever. Google and Facebook have a social, ethical and commercial responsibility. When you create weaponry that can be powerful for causes of good, you have to explore the potential for wrongdoers using that same set of weapons. They have come later to that than they should have, which does not mean it’s too late.

The amount of resources they are going to have to apply to reduce the negative impact of their platforms is enormous. Whether that is a big enough break on their progress, I don’t know.

Will the issues Google and Facebook face today deter advertisers at any point?

The YouTube issues have deterred a number of advertisers, although it didn’t have a catastrophic effect on [Google’s] revenues. We’ve got some clients who are almost religious in their views on proximity to content and other clients for whom sales is such a driver that they are largely unconcerned. Advertisers will be extremely supportive about the effort the platforms are making to prevent misuse, and highly critical if they don’t feel those efforts are being made sufficiently.

I’m most concerned that the economic model for original, informative, educative and entertaining content is not undermined by other forces in the market. We’re closer to the edge of that than we should be, but I don’t believe we’re going to reach the edge. Not everyone is going to make it out, but I think that the content creation industry will survive.

Digital media is having a rough month. Can it survive on an ad-supported model?

The New York Times, Financial Times, Wall Street Journal and HBO create a media experience someone will be prepared to pay for. That’s an ethos that will serve you well. If your idea is to monetize large volumes of undifferentiated eyeballs through intrusive advertising, your business model is not correct in the digital world.

With privacy initiatives like GDPR in Europe, how will digital advertising continue as we know it today?

We don’t know. Agencies have enormous obligations under GDPR. Publishers have those responsibilities, as do advertisers. It’s going to require extreme vigilance.

You’ll find extreme efforts to obtain the right consent for use of first-party data. Simultaneously, you’ll find people re-evaluating whether one-to-one marketing is always relevant. There may be a pullback to think about the world at a cohort level.