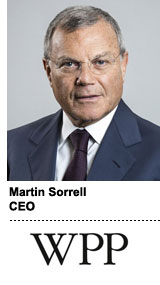 WPP’s stock is down. And the company’s longstanding chief, Martin Sorrell, isn’t sure if the holding company can do anything about the factors putting pressure on its business.

Sorrell shoots down theories that Facebook and Google will eat WPP’s lunch, or that consultancies are scooping up its clients. Instead, he puts the blame squarely on its clients’ activist investors and zero-based budgeting practices. Three of its top five clients – Unilever, P&G and Nestlé – are being affected by this trend, he said, pulling results downward.

“One serious issue we have to grapple is that clients look at us – at marketing – as a cost, not an investment,” he said.

If Google and Facebook have receded as foes – “they’re certainly frenemies, but today they’re much friendlier frenemies than they were before” – Sorrell also discounts consultancies as being able to compete with WPP.

In some cases, such as with McKinsey, WPP agencies will work side by side with the “strategic” consultancy. Other consultancies, he said, are simply buying culture and piecemeal assets.

“They are buying small creative shops all over the place, of dubious quality, second- and third-rate quality, and putting people in to run them who failed in well-known digital operations,” Sorrell said. “I’m not sure that necessarily hits the target.”

Sorrell sees packaged goods companies not only cutting marketing spend they should be investing in their brands, but under attack by Amazon. By creating its own house brands, which it in turn distributes, it threatens to disintermediate WPP’s packaged-goods clients.

Sorrell talked to AdExchanger at the Dmexco conference in Cologne, Germany.

AdExchanger: WPP’s stock – and the stock of other holding companies – is down. What factors causing this decline are within your control, and what are you doing to transform?

MARTIN SORRELL: In our half-year report, there were three key things we focused on that people talk about as challenges to the business. The first is, “Are Google and Facebook going to eat our lunch?” I don’t think it’s that.

The second is consultancies. Where the consultancies have been disruptive or effective is that they do go to clients and say, “You’re spending too much money.”

Which leads us to the real cause of what we have seen in the last two quarters, which is the impact of cheap money creating pools of capital used by the zero-based budgeters, like 3G Capital or Coty, and then activist investors. That’s putting tremendous short-term pressure on our business.

Will this cycle wear itself out?

Well that’s the big debate. The honest answer is that this is driven by cheap money, where cost of capital is close to zero. As an investment banker said to me, “Any deal you fund with debt is accretive, given the interest rate.” We did a 30-year bond under 3%, with tax closer to 2%, which means you can pay 50 times earnings for something without feeling the heat.

The problem is, “How long is cheap money going to last?” And the answer is probably longer than people anticipate.

On stage at Dmexco, P&G’s Marc Pritchard said his company reduced spend by 20% by cutting waste.

Well if it’s waste, then that’s good news. I don’t think what we do is waste.

Talk about the challenge of procurement and finance getting more power than marketers.

Talk to anyone that works at a packaged-goods company. Once your number of users starts to decline, and you rely on price, it’s good night nurse.

What we’ve failed to do as an industry is demonstrate the importance of marketing and branding.

Amazon batteries are one-third of the market in the US. Amazon baby wipes, one-third. Just think of the categories for packaged goods. And Alexa is just telling you to buy the cheapest battery or cheapest baby wipe. If that’s applied across the board, just think of where you are.

These are big challenges. And we are pivotal in working with the brand owners and manufacturers [on their brands].

Is proving the value of marketing the marketer’s responsibility or yours?

That’s our responsibility. Most of the marketing people we work with are convinced of it. People inside the company, the CIO, CFO and CTO, have to be similarly convinced.

I was talking to one CMO yesterday. She sees consultancies permeating her organization, and questioning the cost of what is done. They see [marketing] as a cost, not an investment. All strategy is marketing strategy. It’s not about supply or manufacturing, it’s about what the consumer wants.

If marketing is being devalued, what trouble signs will prove it?

Hasn’t that happened already for some?

I shouldn’t say, because I have to be careful. But just look at the facts. Clients give details on volumes and price.

Some people are saying that those declines are about TV being less effective.

I could say this is TV [gestures to phone]. We are watching more hours on screens than we ever have, so it depends on what you mean by TV.

Print used to be 40%, and now it’s 9%. Print is under pressure. Outdoor is about right, internet is about right and mobile is underrepresented.

Packaged-goods companies are being disrupted by direct-to-consumer businesses. There was Dollar Shave Club, which was acquired by Unilever.

What I think Unilever is saying –and I’m guessing – is that they are worried about the growing dominance of Amazon and its ability to control their data.

Whereas if they have a channel of distribution direct to the consumers, if they have 3.5 million names that they bought from Dollar Shave Club, they have the ability to build a direct relationship, and a relationship where they can control the data.

Merkle was known for doing that, and was acquired by Dentsu. Do you feel like you have capabilities there, or is it something you would want to acquire more into?

MPlatform is a key part of that. We have 245 million profiles in America. We can target them. We have that in Europe and elsewhere.

Xaxis was a big early success because it used WPP’s buying power to acquire discounted inventory, then added value through data and tech. Are you working on replicating that model for connected TV buys, maybe with Modi Media?

On addressable TV and targeted TV, the answer is yes. I think the role of the media agency has become more sophisticated, despite the dominance of Facebook and Google.

The media landscape has become much more fragmented, people are much more confused by it. Ways of optimizing have become more important, not less important, and so has measuring return on investment – I can’t tell you how many times clients say to me they don’t understand the returns they are getting on investments we make.

So Modi will have a model similar to Xaxis?

We are doing that across a whole range of things.

Some of your competitors are going to market with the opposite approach, saying, “We don’t own our tech. We are flexible, and we pick the best tech for each client…”

We are trying to apply the technology we have in an effective way for clients on an agnostic basis, not a biased basis.

If you take Xaxis as an example, we would acquire premium inventory at very competitive prices, and layer data and technology. It amounts to something like a 30% savings, and we think in the long run that approach is going to win out.

Companies that have taken a position on “total transparency” have come to the view that [Xaxis] is 30% more effective.